Looking for signs of emerald ash borer activity in MVNWR

The following article appeared in the Star Tribune April 8, 2016

By YOUSSEF RDDAD Star Tribune
April 8, 2016 — 11:22 p.m.
In its war against the emerald ash borer and other invasive species, the U.S. Fish and Wildlife Service has recruited a new army of allies: science students from Minnesota community colleges.
In the past decade, emerald ash borer beetles have munched their way across much of the Midwest, destroying thousands of trees and racking up billions of dollars in damage. Infestations have been recorded throughout the Twin Cities and near Rochester and Duluth.
But the federal agency is sometimes shorthanded and isn’t always able to conduct boots-on-the-ground surveys that provide detailed information on species populations and movements. Students at Inver Hills Community College provide much-needed assistance, conducting surveys and other fieldwork. In exchange, students get valuable field experience — or at least a class day outdoors.
On Wednesday, about 30 students set out into the Minnesota Valley National Wildlife Refuge in Bloomington to inspect trees near the boggy bottoms of the Minnesota River. Students looked for signs of emerald ash borer activity, including D-shaped holes where adult borers emerge, and other abnormalities.
“This one looks like it’s blonding,” said sophomore John Bennett, pointing to the blonde discoloration on a tree, a telltale sign of emerald ash borer activity often caused by woodpeckers feeding on their larva. Afterward, he wrapped bright pink tape around the base of the tree so Fish and Wildlife agents could inspect it again later.
Bennett, who aspires to become a park ranger in the Boundary Waters Canoe Area Wilderness, said the experiences are relevant to his goals. “This is the kind of work that I want to do,” he said.
Identifying infested trees is crucial in early spring, before leaves cover some of the symptoms, said Nicole Menard, a Fish and Wildlife biological science technician. The timing, she said, also helps authorities gauge the number of infestations and where they’ve spread.
Before Menard can call on the Minnesota Department of Agriculture, which helps curb the spread of emerald ash borers by releasing biocontrol in the form of parasitic wasps, she first needs to record that there’s an outbreak.
The emerald ash borer has not been confirmed inside the refuge, Menard said, “but it has been confirmed all around us.” Noting that field surveys can be long and costly, she added: “The students are able to help us do our only official survey.”
By the end of Wednesday morning, students had marked 65 trees suspected to have emerald ash borer infestation. Next, Menard said, will be close inspections to confirm whether the pests have breached the borders of the wildlife refuge.

In addition to tracking emerald ash borers, Inver Hills students have helped the agency determine muskrat populations on frozen lakes. Muskrats, while not endangered in Minnesota, have a delicate balance with the cattail population and play an important role in wetland ecosystems.
Menard said that her agency conducted aerial surveys for muskrat huts, but that it wasn’t able to tell which huts were inhabited, making it difficult to approximate muskrats’ numbers. Students solved that riddle by sticking thermometers into the huts to see if they had warm rodents inside.
One student, Gemma Beck, did additional muskrat surveys for a semesterlong project, which Fish and Wildlife used for its records. “There are a lot less muskrats than we thought there would be,” Beck said.
Inver Hills biology instructor Lisa Tracy, who heads a number of the cooperative projects, said that working with multiple parties gives students a glimpse into science careers. After conducting studies, students hand off their information to the Fish and Wildlife Service, providing the agency with hard-to-get trend data.
Since the partnership began three years ago, more than 250 students have participated, Tracy said.
In a project monitoring a fatal fungus in frogs near the Inver Hills campus, students work with other community colleges to help analyze data.
“Working together across organizations and across labs is something that’s really essential for science to work,” Tracy said. “It’s motivating for students, I think, to work with other people and get input from professional scientists.”

The Inver Hills Academic Research Conference (ARC), a two-day event held each spring for students, faculty and staff to present their scholarly and creative research, is happening at the same time and place, Wednesday, April 20, and Thursday, April 21, in the Fine Arts building on the main campus of Inver Hills Community College in Inver Grove Heights, Minnesota. Our theme this year centers on exploring solutions that can lead to worldwide peace, equity and sustainability. For more information about ARC, contact Heather Brient-Johnson or Lisa Tracy, members of the college’s Biology faculty.

This award recognizes a community-based organization that has enhanced the quality of life in the community in meaningful and measurable ways while engaging in the development of sustained, reciprocal partnerships with the college or university, thus enriching educational as well as community outcomes.

Nicole Menard
Biological science technician with the U.S. Fish & Wildlife Service at Minnesota Valley National Wildlife Refuge
Nominated by Lisa Tracy, Inver Hills biology faculty
Nicole’s work has engaged students in research that has direct application in the management of wildlife and local habitats. This reciprocal partnership has served the USFWS by providing information for data-driven decisions while offering hands-on research for students that enriches their educational experience. Nicole’s collaborative approach to biology education has directly benefited 175+ Inver Hills students.
Award recipients were recognized at a luncheon during MNCC’s annual summit on April 7, 2016, at Macalester College.

For more photos from the Inver Hills Biology EAB Survey at the MVNWR, visit Inver Hills on Flickr.

To learn more about Biology, earning an Associate of Arts (A.A.) and the Annual Research Conference at Inver Hills, contact: 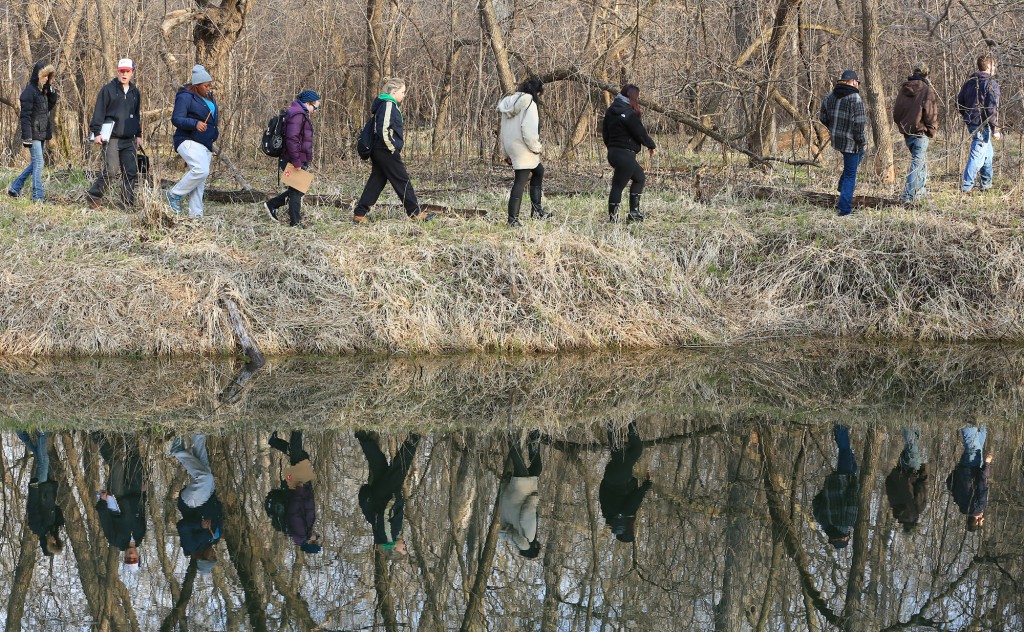