Doug Hanneman, a student at Inver Hills Community College from 1974 to 1977, has been named the college’s 2020 Alumnus of the Year. Doug studied journalism and human services at Inver Hills, earning more than 120 credits, or just one credit short of his Associate of Arts (A.A.) degree. He is looking forward to taking an online course or courses at Inver Hills starting fall semester 2020.

“I would to love to get my A.A. from Inver Hills,” Doug said. “Thirty-nine years ago, I was short just one English credit. I had every intention of earning that credit at the time. I’m really busy doing a lot of volunteer work, but it would probably be worth my time to reevaluate some of that volunteering to see how I could fit that degree into my schedule and then start on my bachelor’s degree. A former reporter that I worked with for seventeen years told me last week she is going to hound me to do that. And I think my kids would like me to do it, too.”

“The learning opportunities offered at Inver Hills provided me with a terrific foundation for a rewarding career that focused on community. I’m indebted to the college for giving me such a great start.

“Those opportunities ranged from the journalism classes that allowed me to meet and write about fascinating people, to an internship with DARTS—which introduced me to people who were aging with grace—to human service classes that opened my eyes to the needs of all people. All of those learning experiences offered by Inver Hills centered around community.

“As a reporter for the student newspaper in 1976, I wrote a story about DARTS, which had been started by Inver Hills as a community service for older adults and was based at the college during its first five years.

“That story in the student newspaper eventually led to a full-time job with DARTS, and that led me to join with another Inver Hills student, Don Parker, in starting, Good Age, a newspaper for older adults. From there I went on to explore other exciting opportunities in community journalism as an editor at the South Washington County Bulletin and Hutchinson Leader.”

Born and raised in Oshkosh, Wisconsin, Doug is a graduate of Oshkosh West High School, Class of 1973. While attending Inver Hills, Doug worked on the student publication, Inver Hills Forum. DARTS, or Dakota Area Resources and Transportation for Seniors, was launched at the college during that period, and Doug was hired as an intern to edit the DARTS newsletter.

Inspired by his work advocating for the interests of older adults, Doug co-founded Good Age in 1981 with Don Parker, a former Inver Hills student and current communication studies faculty. Originally designed as a newspaper to keep seniors informed, Minnesota Good Age still serves the greater Twin Cities area today. In 1991, the Minnesota Gerontological Association recognized Doug for his work with seniors by naming him Outstanding Gerontologist of the Year.

Doug stays very busy in his retirement by volunteering with his church and numerous community-service organizations. He works to inform Minnesotans age 62 and above about opportunities to take tuition-free classes for minimal fees at Inver Hills and other Minnesota State two-year colleges.

Doug Hanneman lives with his wife, Kathy, in Hutchinson, Minnesota. Doug and Kathy have two grown sons and four grandchildren.

How did your journalism studies at Inver Hills help prepare you for your career as a newspaper editor?
My journalism instructor at Inver Hills was Jonathan Frerichs, who offered his students a great amount of individualized attention that I might not have received had I attended a larger school. In fact, I was his only student in a News Editing class, which I greatly appreciated.

Perhaps it was that individualized attention that helped me practice later what is known in the industry as collaborative editing. Collaborative editing is when the reporter submits her or his story, the editor reviews it, and then the editor sits down with the reporter to discuss those changes. The reporter might agree or disagree with the edits, but at least there’s some give and take and there’s learning that goes on.

I practiced that approach throughout my career. At many newspapers, the editor simply makes the changes, and the reporter learns about them when the newspaper comes off the press. I believe the collaborative approach helps both the editor and reporter avoid breaking the First Commandment of Editing, which is “Do No Harm.” 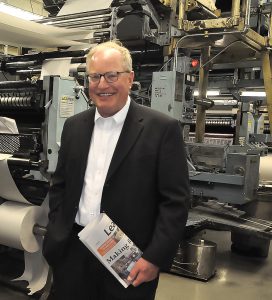 Why should college students work hard to improve their writing skills?
When I’ve spoken to students about our trade—and I worked with some amazingly gifted high school and college interns during my career—I’ve told them that writing is a skill they will use all their life no matter the career they pursue. Whatever our vocation might be, we need to express ourselves clearly and concisely. And this doesn’t just apply to teachers, managers or people in the news business.

I’ve learned from a number of gifted writers who weren’t journalists. One of the best writing coaches I met during my working years was a lieutenant at the Hutchinson Police Department who required all of his officers to write well. He didn’t tolerate police reports with grammatical or punctuation errors. All of us reporters who depended on information from those police reports benefited from this lieutenant’s tenacity.

What advice would you give college students and alumni regarding lifelong learning?
During the first half of my career, I learned about the importance of lifelong learning from the hundreds of older people I interviewed. That continued when I transitioned into community journalism. It might seem a cliche to say that once you stop learning, you might as well be dead, but I think that’s true. And learning isn’t just about taking college courses or community ed courses, though I certainly recommend those, of course.

In my trade, I attended scores of industry seminars and workshops, and read many newspaper trade publications. I have a closet full of materials from those classes and publications, and I shared those materials as often as I could with the reporters I worked with. But probably the best learning took place while I was on the job, when I would run into a problem and had to seek out solutions.

We have many bright, innovative people in our industry. And we’re constantly learning, which has made our trade so rewarding. It’s really painful to see what is happening to newspapers and these reporters and editors now. People are turning to local news outlets today more than they have in years, seeking information related to COVID-19. But advertising revenue has cratered and many newspapers are slashing wages and laying off folks.

In fact, one of my former papers, the Bulletin in south Washington County, is closing in a few weeks, a victim of COVID-19. The same thing with the Hastings Star Gazette, a paper with a long, colorful history and one that I have long admired. It’s shocking to see what is going on. If people don’t receive their local news from professionals who have been trained to gather and deliver them the news, how will they get it?

Doug Hanneman is a great example of a student who learned his craft here at Inver Hills, and then used it to be of service throughout his career, and even now in retirement.

In this, our 50th year, I’m pleased to nominate Doug, who has had an association with Inver Hills that goes back to the 1970s. He became a student at Inver Hills in winter quarter 1974, and joined the Inver Hills student newspaper, the Forum, where he wrote news stories and features.  He also took journalism courses here. Another notable member of the Forum at that time was Dane Smith, who went on to an outstanding journalism career of his own, and was later named an Inver Hills Alumni of the Year.

Doug’s work on the Forum drew the attention of the director of DARTS, an Inver Hills-initiated community service for older residents of Dakota County, which had office space at Inver Hills upstairs from the Forum offices.  DARTS hired Doug, first as an intern, then as full-time editor of its newsletter, the DARTS Journal. To learn more about the services that DARTS’ clients depended on, Doug continued taking classes at Inver Hills in Human Services until 1977, earning more than 120 quarter credits here.

By 1981, Doug’s work in service to older residents of Dakota County inspired him to dream of a publication that would inform older adults of services, not just in our county, but throughout the broader metropolitan area, so he founded Good Age, a newspaper (now published as a magazine) to inform older adults of all manner of health, educational, housing, nutrition, transportation, and entertainment resources.

Outstanding Alumni of the Year Award

Inver Hills Community College seeks nominations from alumni, faculty, staff and Foundation Board members to recognize an individual with the annual Outstanding Alumni Award. The Alumni Association Board selects the awardee each spring. Nominations are welcome throughout the year.

An alumna or alumnus is selected based on professional achievement or distinguished community service. Eligible nominees have completed at least 30 semester credits or a certificate program at Inver Hills.

The Inver Hills campus community sends congratulations and appreciation to all 2020 Outstanding Alumni of the Year nominees for their success and continued commitment to the college: