Mark Weigel, 85, a former counselor at Inver Hills Community College, started working at the college in 1970. Mark was the first faculty member hired at Inver Hills, and he was instrumental in getting the college (then called Southeast Metropolitan State Junior College) up and running. He served as part of a core group of four people that included Art Gessner, first president of Inver Hills, Jerry Isaacs, dean of instruction, and Willis Johnson, dean of students.

“None of the buildings were built and ready for operation when I started fifty years ago,” recalled Mark, who retired in 2002 after 32 years at Inver Hills. “We leased space from nearby Hilltop Elementary School to develop the curriculum, interview and hire the first seventeen faculty members, and talk with prospective students. We started the fall quarter with 300 students. In September of that year, the new Library building opened on campus. The Science and Activities buildings opened a few months later.”

Mark mentioned that extracurricular and recreational activities, including student clubs, organizations and intramural sports, were a major draw for students. The college also offered NJCAA athletics in a variety of programs, including football, volleyball, women and men’s basketball, tennis, golf, baseball, track and fastpitch softball.

“I met Bo Johnson when he was a student and played football for the Inver Hills Giants as a center and nose tackle,” Mark said, referring to Tom “Bo” Johnson, who went on to work for the college for 46 years, retiring as recreational director in 2017.

Although counselor was his official role at Inver Hills, Mark was exceptionally engaged with faculty development. He was also directly involved with developing a unique college governance structure that included a voting membership of administrators, faculty and students. In 1982, he collaborated with Michael Ackerson, Inver Hills faculty and a fellow member of the Minnesota Community College Faculty Development Committee, to write and publish a Faculty Development Booklet for the Minnesota Community College Faculty Association. He served for one year as faculty development director for the entire MnSCU system (now Minnesota State). 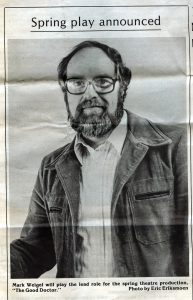 During his six sabbaticals as an Inver Hills counselor, he conducted research on community college best practices in a variety of key areas. He felt driven to improve life on campus for students and his peers by viewing issues from a comprehensive, college-wide perspective.

“Early in my career, I participated in an educational program at the University of Missouri that invited thirty community college professionals from across the United States,” Mark said. “We discussed our views on the role of community colleges, including what defined that learning environment. I learned a lot and developed a strong interest in governance and adult development.”

Mark followed through on an eclectic range of duties during his Inver Hills career, serving year-long appointments as dean of students and registrar. When the college was new, he worked as financial aid director. He also worked with international students and carried out institutional research. One of Mark’s favorite memories of his time at the college is acting in a dozen Inver Hills Theatre productions, taking on parts written for vibrant, older characters.

“Mark Weigel was one of my go-to actors!” said George Roesler, theatre faculty and Mark’s director in the plays. “If I needed a father figure, a powerful judge or a brash, intelligent writer, Mark was the person I wanted to cast. He has a wonderful baritone/bass speaking voice as well as a beautiful singing voice that would resonate in the Fine Arts Theatre.”

Originally from Marshfield, Wisconsin, Mark graduated from Columbus High School in 1953. He worked for 10 years as a biology teacher and counselor at St. Bernard’s High School, a private Catholic school in St. Paul that closed in 2010. He served as a counselor at Anoka-Ramsey Community College for a year before starting a career journey at Inver Hills that spanned more than three decades.

Mark was married to his wife, Judith, an Inver Hills Paralegal alumna, for 44 years. Judith passed away 15 years ago. She was a published poet and career paralegal. She also worked as an editor creating Little Golden Books for Penguin Random House in Racine, Wisconsin.

Judith and Mark had two sons. David, 57, graduated first in his class at Hamline University School of Law. He’s married to his partner, Jon, and works as a computer professional in Villanova, Pennsylvania. Paul died at age 52; he worked with computers in the banking industry. Mark has three adult grandchildren, Anthony, Chris and Kenneth. Anthony and his wife, Kelly, have two children, Mark’s great-grandchildren, Bailey Jo, 6, and Riley, 4.

Mark sang with the South Saint Paul Male Chorus for 30 years. He also sang bass in various church choirs and served as a church lector for 45 years. He belongs to the Inver Hills Legacy Society and contributes to the Mark & Judith Weigel Staff/Admin Stipend Fund. Mark resides near the Inver Hills campus in Inver Grove Heights, Minnesota.

How have you been spending your retirement years?
I’ve taken 60 credits in classes at Inver Hills since I retired. I completed course in subjects I was curious about, including German, French, Spanish, Theatre, English and Philosophy. I also organized get-togethers for a group of 30 retirees. Although physically limited, I continue to regularly participate in the Silver Sneakers program at the YMCA.

What is your best memory from your time at Inver Hills?
The lifelong relationships I forged with my colleagues. I had the opportunity to grow and help others at Inver Hills. I was able to use my talents to help create a better workplace for my coworkers and a stronger learning environment for our students.

“Mark Weigel was one of my go-to actors! If I needed a father figure, a powerful judge or a brash, intelligent writer, Mark was the person I wanted to cast. He has a wonderful baritone/bass speaking voice as well as a beautiful singing voice that would resonate in the Fine Arts Theatre.

“Mark added a sense of professionalism to a cast, which was an excellent example and teaching tool for my student actors. He always developed a clear, three-dimensional character that audiences could identify with and relate to.

“I loved working with Mark on our various projects. I have so many fond memories of his performances that I will keep with me always. He is one of my favorite actors and human beings. I am so happy to have been able to work with him on all those shows.”

“Mark Weigel’s dedication and contribution to Inver Hills has had a long-lasting impact. Mark was involved in so many aspects of the college that we couldn’t begin to assemble a comprehensive list of all that he has done!

“It was his leadership, along with his fellow counselors, that strengthened our department and paved the way for how we serve students today. However, what I truly appreciate about Mark is that he always challenges us to not be shortsighted and focus on what is best for students.

“He models what it means to be a lifelong learner. We are stronger because of Mark!”

“Every time I see Mark Weigel, it brings back such good memories I have of my time working in Records and Registration (back in the early 90s). Mark was a counselor, and he was housed across the hall from our office.

“We truly had a great team in the Student Services area, and it was fun to come to work. I saw Mark a lot in person, but it feels like I spoke to him even more because Mark’s voice was used on all department voicemail messages (and I think still is for some departments).

“If they ever bring back the show, Who Wants to Be a Millionaire?, and I’m a contestant, Mark Weigel will definitely be my “Phone a Friend” because he’s one of the wisest men I know.”

“Mark’s Inver Hills’ institutional history was so very apparent from the beginning of my career at Inver Hills. I wore out the carpet between my office and his seeking answers to my many questions about Inver Hills and community college counseling. He was very generous with his time and never seemed irritated when I asked something.”

“One of the many things I admire and appreciate about Mark is how he has demonstrated an ongoing love for learning since his retirement. He continued to have a positive presence on our campus by taking courses from a multitude of academic departments here at Inver Hills. What a treat for the faculty and students to have Mark as a classmate!”

“Mark Weigel was the first Inver Hills employee I met when I took the ACT test in the fall of February 1971. Mark was the interim dean of students, and he supervised Student Senate. I was a student senator at the time, and I always enjoyed working with Mark and followed his advice.”

“Mark is a dear friend and a treasured colleague. He’s the epitome of a lifelong learner and I’m so grateful I had the opportunity to work with him before his retirement from Inver Hills. His student advocacy, leadership on campus, sense of humor, and commitment to our institution have always inspired me to be the best counselor I can be and to continue his good work.”