Alfred and Edith Kromschroeder and their children, Keith and Joy, prospered on a diversified general farm, raising dairy cattle, hogs, chicken and various crops on 80 acres in Inver Grove Heights, Minnesota. A section of the Inver Hills Community College campus was once part of that farm, which once belonged to an interconnected community of farms in the area.

Alfred sold the farm in 1968, having farmed and worked in construction up to that point. Keith was in the U.S. Army at the time, serving overseas in South Korea as a 22-year-old vehicle mechanic. Keith’s unit had been scheduled to deploy to South Vietnam, but orders were changed when North Korean forces attacked and captured USS Pueblo in what would be called the Pueblo Crisis.

Along with land from the neighboring Trost farm, Keith and Joy’s farm, which had been in the Kromschroeder family since the Great Depression, would become the future site of the Inver Hills campus. A small part of the Kromschroeder farm also became the site for Simley High School.

Keith Kromschroeder and his wife, Jane, and his sister, Joy (Kromschroeder) Curtin, visited Inver Hills in mid-November 2019. They reminisced about life on the farm and toured the campus. Keith and Jane’s son, Luther, had contacted the college in early fall to pass on his family’s connection to Inver Hills in light of the 50th Anniversary.

Joy majored in International Relations at Hamline University, got married and had a successful and happy career in the business world. She is retired and resides in Inver Grove Heights. Keith went on to become a dairy farmer and truck driver. He and Jane have lived on a 10-acre hobby farm near Lake City, Minnesota, for nearly 30 years.

“I loved farming,” Keith said, remembering how all the neighboring farm families worked together during harvest times. He has fond memories of his dog, Sandy, and helping his father, Alfred, remove stones from their fields. “We had a hill for tobogganing, plenty of raccoons, pheasants and skunks, and wild gooseberries for pies.”

“Our mother, Edith, made the best pies,” Joy added with a smile. “Among many other things, she enjoyed reading—and she encouraged literacy. I remember fondly a time when we picnicked under an oak tree in the pasture and she read to us.”

During the tour, Keith and Joy pointed out a number of features on campus that they recalled from life on the farm, including a hay loader that was lofted into the air and destroyed by a tornado in the 1950s. The pond just east of Blaine Avenue and north of The Commons of Inver Grove was part of their farm.

Keith pointed out that the Kromschroeders are originally from Germany. Keith and Joy’s grandfather, George, was born in Germany in 1867. George’s wife, Caroline Klein, lived to the age of 96. Joy traveled to Germany in 2018 and visited the Kromschroeder and Klein ancestral homes in Lübbecke and Eickhorst, both located in Westphalia, getting a powerful sense of history.

“Our parents would be pleased that a college is now located on our family farm,” Joy said. “They both valued education.”

A native of Lake City, Minnesota, Luther Kromschroeder graduated from Lake City High School in 1998. He went on to earn a B.S. in Civil Engineering from Minnesota State University Mankato and an M.S. in Engineering Management from the University of Idaho.

Today, Luther works as a project manager at the Naval Nuclear Laboratory in Howe, Idaho. He moved to Idaho because he loves the mountains, scenery and snow skiing. He’s single and has three brothers, two sisters, and 12 nieces and nephews. Luther resides in Pocatello, Idaho.

Artifacts found within the boundaries of present Inver Grove Heights show evidence that early Woodland culture people were here along the Mississippi River, perhaps about 2,000 years ago.  Woodland culture typically included pottery, burial mounds and some agriculture. It is likely that other, earlier habitation sites existed, but were covered by water after the Mississippi was dammed and flooded above Hastings in 1930.

Evidence found elsewhere in Dakota County shows people from the Archaic period, thousands of years earlier. Roughly 1,000 years ago there was a late Woodland village in southeastern Inver Grove, east of the present Inver Grove Trail near the river. From 1837–1852, Chief Medicine Bottle led a Dakota village in extreme southeastern Inver Grove at Pine Bend. During that period, a trail ran from near his village to the Mdewakanton (Bdewakantowan) village at Mendota (Bdote). This trail would have run very near to where Inver Hills sits today.

The Treaty of Mendota in 1851 ceded Dakota lands to the U.S. government, forcing most of the inhabitants to move to reservations to the west. By 1853, land in Inver Grove was being claimed for settlement with most of that land taken within a few years. Among the settlers were many families from Germany—like the Klein(e)s and Kromschroeders.

An 1896 plat map shows that land now around Inver Hills was owned by Jacob Trost, the Klein(e) family, and George and Caroline Kromschroeder (see image below). The location of the Inver Hills campus is toward the bottom of the map where several roads come together. Some of those roads are still recognizable, such as present-day College Trail and the North-South Cahill Avenue and Babcock Trail (then called Middle Road and German Road).

Many German families lived in this part of Inver Grove and to the north. They attended churches and at least one school in which German was spoken. To the south, Inver Grove was settled mostly by Irish families, several of whom came from Inver, a village in County Donegal, Ireland. Inver Grove—and Inver Hills Community College—take their names from this village. 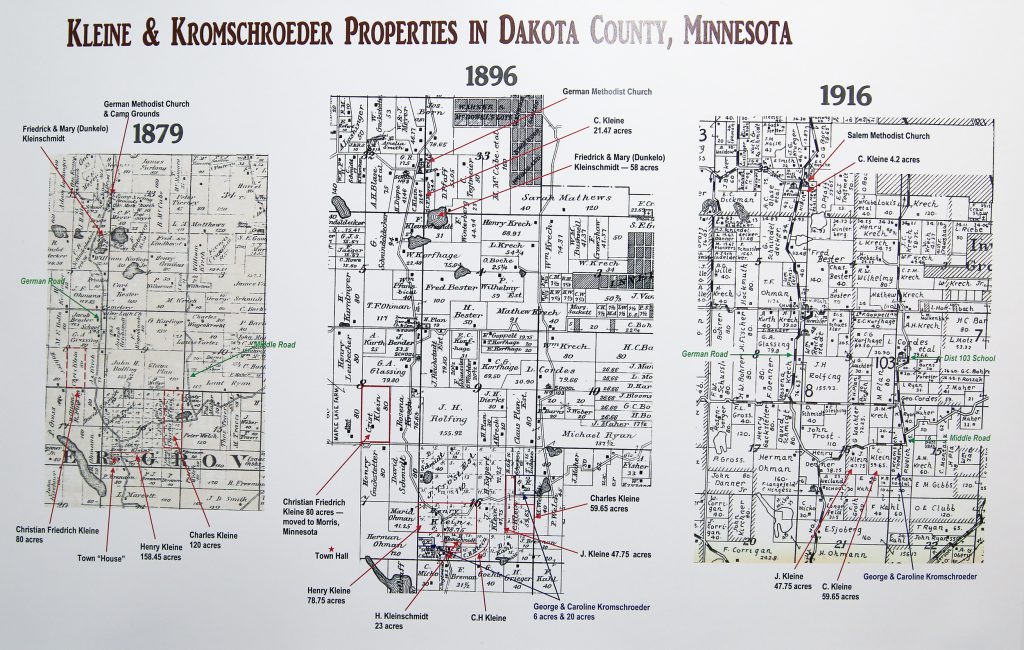 Inver Hills Community College and Dakota County Technical College are members of the Minnesota State Colleges and Universities system, which was established in 1995. At the time, Minnesota State was looking at merging community and technical colleges, especially institutions in proximity to one another. Merging Inver Hills and DCTC was discussed, but not acted on.

In 2013, the system chancellor announced that Inver Hills President Tim Wynes, JD, would serve as the interim president of DCTC following the retirement of President Ron Thomas, PhD. In 2015, the shared presidency became permanent and moves were taken to incorporate shared administration at all levels.

Inver Hills and DCTC continue to implement shared strategies that position the colleges as education partners of choice while recognizing the unique missions and pedagogic goals of each school.

Thousands of people have passed through the doors of each college with the aim to improve their lives through education. The two colleges together generate nearly $335 million in positive economic impact annually.

Leaning into the next 50 years, Inver Hills and DCTC are building on their proud histories of dedication, creativity, imagination and vigilance in delivering educational options that promise a bold future for our graduates and their families.