Impetus for Departure is showing at Gallery 120 in the Fine Arts building on the campus of Inver Hills Community College Monday, March 25 through April 18, 2019. The Gallery 120 show corresponds with the National Council of Education for the Ceramics Arts (NCECA ) 53rd annual conference, Claytopia, March 27–30, 2019, in Minneapolis. The show is listed in the NCECA online program guide and conference program.

“Inver Hills is proud to support the NCECA conference in Minneapolis,” said Rachel Sonenblum, the college lab assistant who organized Impetus for Departure at Gallery 120. “Impetus for Departure highlights the work of  students who have continued pursuing ceramics after graduating from Inver Hills. The show places the current work of Inver Hills ceramics alumni amidst the work of the instructors and staff who provided them with their foundation in ceramics.” 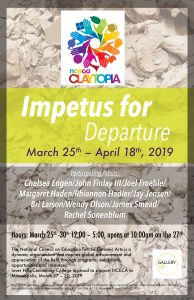 Reception during the Fine Arts Festival:
Thursday, April 11, at 2 p.m.

Wendy Olson and Jay Jensen teach ceramics courses at Inver Hills. Joel Froehle provides his students with opportunities to build, sculpt and cast clay in 3D design and sculpture classes. On the technical side of things, Rachel Sonenblum manages the daily needs of students and functions of the studios.

The show’s title refers to the way our instructors impart their students with the skills and knowledge to experiment within the medium of clay and then quickly release them into the greater ceramics community. All the students showcased in Impetus for Departure have continued their arts education at four-year colleges and universities, venturing as far as Alfred, New York to complete an MFA in ceramics.

All these artists use clay to explore dichotomies. Complex narratives are at home on a familiar functional form. The natural food chain is examined from the lens of predator and prey on forms designed for human consumption. Formal themes of contrasting glazed pattern with areas of bare clay and juggling asymmetry to balance bulbous shapes are explored be multiple artists.

Stability and the ever-changing process of decay are addressed in pieces that deteriorate over days. Worlds of emotional instability are grounded in sculptural ceramic scaffolding. Concepts of geologic time and daily routine are meshed into single works of art.

In addition to their current studio work, each artist in Impetus for Departure will create a series of three cups to be displayed on shelves surrounding the gallery. The cup is one of the potter’s most essential forms and references the studio potter culture in Minnesota that has paved the way for many of the artists in this show. The crafted domestic object is a concept some of these makers embrace, some react to and others revolt against, but its infiltration of our regional culture makes it a common language we can all speak.

More about the NCECA… 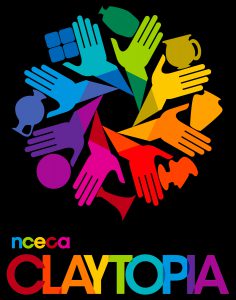 The National Council on Education for the Ceramic Arts (NCECA) is a dynamic organization that fosters global education and appreciation for the ceramic arts. NCECA’s programs, publications, opportunities and resources inspire advancement of the field. ¹

Claytopia, NCECA’s 53rd annual conference, will take place in Minneapolis, Minnesota March 27–30, 2019. Since the 1960s, the Twin Cities region has played a pivotal role in shaping a renaissance in studio pottery and craft as cultural forces. Adaptation of Mingei-inspired ideals within the American heartland drove a vision of artfulness in daily life. Learn more…

About the participating artists…

Chelsea graduated from Inver Hills in 2017 with an Associate of Fine Arts (A.F.A.) and went on to earn her bachelor’s degree in art at Metropolitan State University.

John graduated from Inver Hills in 2015 as a fine arts major and went on to study art at the University of Minnesota, Twin Cities.

Joel has been an instructor at Inver Hills since 2009. He currently teaches 2D design, 3D design and Sculpture.

Margaret graduated from Inver Hills in 2005 with an A.F.A..  She went on to earn a Bachelor of Fine Arts (B.F.A.) from University of Wisconsin, River Falls, and a Master of Fine Art (M.F.A.) from Alfred University.

Rhiannon is a current Inver Hills student. She is scheduled to graduate with her A.F.A. in May 2019.

Jay has been an instructor at Inver Hills since 2004. He currently teaches Ceramics and Intro to Art.

Bri graduated from Inver Hills in 2011. She went on to study art at the University of Wisconsin, River Falls, where she earned her B.F.A.

Alex is a fine arts student at Inver Hills and plans to transfer after this semester.

James was a PSEO student at Inver HIlls in 2010 and went on to study art at the University of Wisconsin, River Falls.

Rachel is a college lab assistant in the fine art studios at Inver Hills. She has been in her current role since 2014.

Learn more about Impetus for Departure at Gallery 120 by contacting: