Vicky Knickerbocker, humanities and sociology faculty at Inver Hills Community College, led a six-day Explorica trip to Washington, D.C., and New York City over spring break in March 2019. Vicky was accompanied on the trip by Melea Bardal, reading and writing faculty, one parent and five students, including Ryan Walfoort, an Inver Hills sophomore earning an Associate of Arts (A.A.) with an Emphasis in Political Science.

Fourteen students and teachers from Foley High School in Foley, Minnesota, joined the Inver Hills group on the trip. Vicky noted that the connection with Foley led to Inge Auerbacher, a Holocaust survivor, addressing 400 students at the high school March 22, 2019, the same day she spoke to a group of PTK members and advisors at the Minn-Kota Regional 2019 Honors Institute and Spring Conference on the Inver Hills campus.

Vicky has led several trips to places all over the world, including a nine-day tour of Cuba in March 2016 with Inver Hills faculty and students. She’ll be leading an Explorica trip to Italy in May of this year. She will also be leading two trips in 2020. A spring break trip to Canada in March 2020 and an international travel journey to Peru in May 2020.

“Explorica did a super job arranging our most recent trip over spring break,” Vicky related. “We visited numerous historical and cultural sites in Washington, D.C., and New York City. Two of the most significant stops on our itinerary were tours of Arlington Cemetery and the U.S. Holocaust Memorial Museum. We also had the opportunity to eat at a number of restaurants with cultural significance, including a deli visited by former President Obama.”

Vicky added that on the way to New York City students toured Mount Vernon, the home of President George Washington. A tour of the United Nations in New York was one of her favorite stops on the trip. She has waited her whole life to explore the U.N. building.

“I saw with my own eyes parts of the building I had only previously viewed in textbooks and on TV,” she said. “I was able to stand in the room where Inge Auerbacher recently gave an inspirational Holocaust commemorative speech. I was quite impressed! Visiting the United Nations was another historical milestone for me.”

A 2015 graduate of Eagan High School, Ryan Walfoort, 22, is earning his Associate of Arts (A.A.) with an Emphasis in Political Science at Inver Hills. Ryan is on track to graduate May 2019. He is looking forward to transferring to Minnesota State University, Mankato to major in political science.

“Visiting Washington and New York with Inver students and faculty was a memorable time,” Ryan said. “I loved it.” 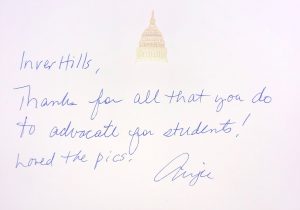 One major highlight for Ryan was the visit he arranged with Angie Craig, the U.S. congresswoman representing the 2nd District of Minnesota.

“Our group met with Angie on the steps of the U.S. Capitol,” Ryan said. “She talked about ways to make higher education more affordable.”

Other highlights for Ryan were a visit to the Empire State Building (he’s afraid of heights), a tour of Strawberry Fields in Central Park and a stopover in Times Square.

“I also had the opportunity to watch the St. Patrick’s Day Parade,” Ryan added.

Learn more about Political Science at Inver Hills by contacting:

Learn more about Sociology and the Humanities at Inver Hills by contacting: