Sam Klein, 22, is a professional drummer in two Twin Cities bands, Crushed Into Place, alternative rock with funk and R & B influences, and Embassies, pop indie-rock. Sam was studying music at McNally Smith College of Music with three semesters completed when the school closed without warning in December 2017.

“That was a difficult time,” Sam said, “but I decided to move on and continue my college education without looking back.”

Today, Sam is earning his Associate of Fine Arts (A.F.A.) in Music at Inver Hills Community College. He is on track to graduate in spring 2020. He has performed with the college’s African Drum and Dance and IHCC Steel Drum ensembles. This fall Sam will begin working as an assistant in the Music department.

Sam’s academic plans for after he graduates from Inver potentially include earning his Bachelor of Arts (B.A.) in Music from Minnesota State University Mankato. His career plans are focused on expanding his reach and impact as a professional musician.

“I want to tour the world, playing a variety of different styles of music with different bands/artists,” Sam said. “I want to experience as much music and as much of the world as I can.”

Intro to Midi and Sound Design

During spring semester 2019, Sam completed a music course at Inver called Intro to Midi and Sound Design. His instructor, Anthony Titus, reported that the course provides opportunities for students to receive hands-on experience working with Musical Instrument Digital Interface, or MIDI, which is used to link a full range of electronic musical instruments, computers and audio devices for playing, editing and recording music.

“Students learn the fundamentals of MIDI such as basic techniques, hardware and software implications, sound design, virtual studio and sequencing,” Anthony said. “An emphasis is placed on MIDI applications to audio and video.”

“The course allowed me to experiment with my creativity. Projects have end goals, but you can get to those goals in many different ways.”

Sam found that the Intro to MIDI and Sound Design course improved his understanding of the music recording process in two significant areas.

“I learned a lot about Flex Time/Flex Pitch,” he said. “Flex Time is the ability to go in and manually quantize an audio track. For example, if you have a great take of an instrument in the studio, but a section is slightly off beat, it can be adjusted so that it’s perfect on beat. This eliminates having to re-track that section. Flex Pitch is the ability to manually adjust the pitch of the note. For example again, if a vocalist sings a note a little too sharp, you can adjust the pitch so that it’s perfectly on key without having to re-track anything.”

Anthony appreciates Sam’s dedication to musical excellence and is happy he was able to find a home at Inver Hills. “Completing his A.F.A. in Music will give Sam the solid foundation he needs if he decides to transfer to a four-year school. The A.F.A. also teaches students about the music industry through direct interactions with industry professionals.”

You can follow Sam Klein, Crushed Into Place and Embassies on social:

Originally from Newburgh, New York, Sam graduated from Newburgh Free Academy in 2015. In addition to his role as a permanent member of Crushed Into Place and Embassies, he drums periodically with TIMISAROCKER, Runaway Ricochet and Midnight Notion. He performs on a Pearl Decade Maple drum kit with MEINL cymbals.

Sam met his girlfriend, Jasmine Anderson, 20, at McNally Smith. Jasmine is the lead vocalist in Crushed Into Place. Sam has two older brothers, Ryan, 29, “the guy semi drivers call when they run into issues on the road,” and Reggie, 27, a diesel mechanic, and one little sister, Tabitha, 6. He also has a cat, Henrietta, 12.

In his free time, Sam enjoys walking and hiking. He also likes playing videogames, including RPGs like The Witcher 3: Wild Hunt, The Elder Scrolls V: Skyrim and The Legend of Zelda: Breath of the Wild. Sam resides in Inver Grove Heights, Minnesota.

Why did you take the Intro to Midi and Sound Design course?
To get a better grasp on recording and creating music professionally.

What did you like best about the course?
The course allowed me to experiment with my creativity. Projects have end goals, but you can get to those goals in many different ways.

Three words that describe you as a musician:
PREPARED. FOCUSED. DETERMINED.

What was the most challenging aspect of the course?
Hitting a dead end creatively. It’s much easier to move on to something else when those creative juices stop flowing than it is to follow through with the project. Although, sometimes that time away from a project is what helps you come back and get it right.

What type of music do you like best?
Pretty much everything, but I have a special love for progressive rock, funk, R & B, fusion and math rock.¹

¹ IHN: Math rock, what? No, it’s not −1 + 6i + 9 = 8 + 6i performed on a hypotenuse. Wikipedia to the rescue: “Math rock is a style of indie rock that emerged in the late 1980s in the United States, influenced by post-hardcore, progressive rock bands such as King Crimson, and 20th century minimal music composers such as Steve Reich. Math rock is characterized by complex, atypical rhythmic structures (including irregular stopping and starting), counterpoint, odd time signatures, angular melodies, and extended, often dissonant, chords. It bears similarities to post-rock.” 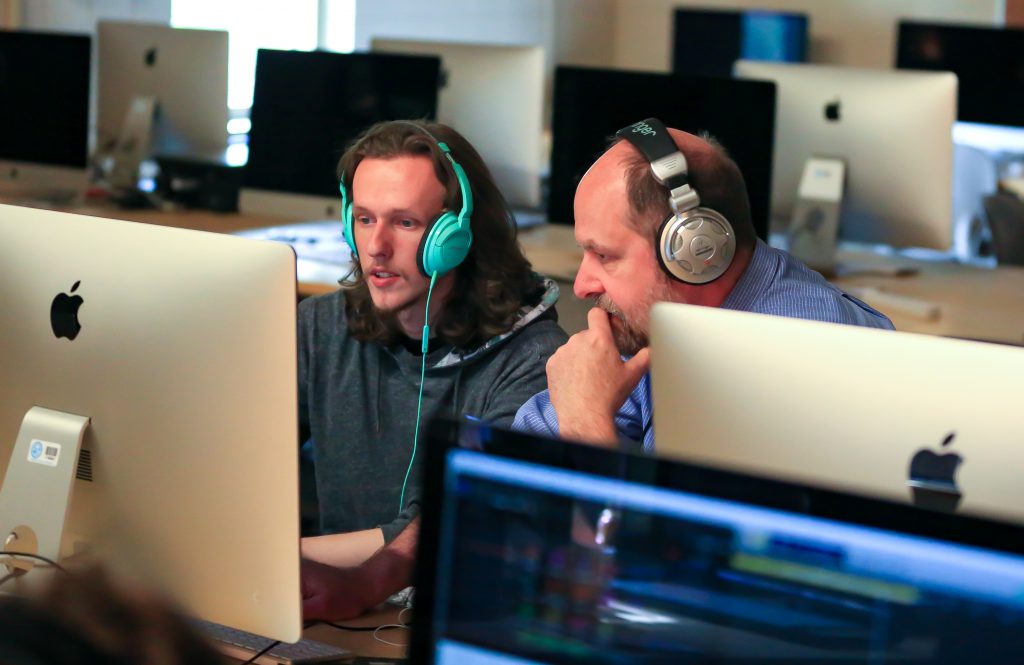 Crushed Into Place is releasing a new extended play record called “Identity” this July. You can celebrate the new EP by going to the release show at The Garage in Burnsville, Minnesota, Saturday, July 13, 2019, at 7 p.m. Tickets are $10 in advance and $12 the day of the show. 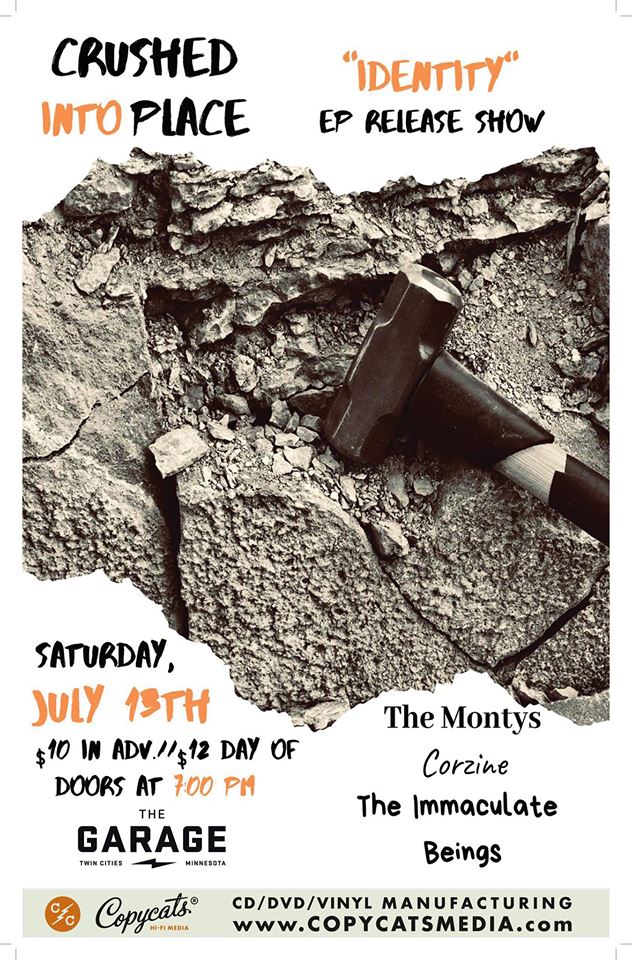 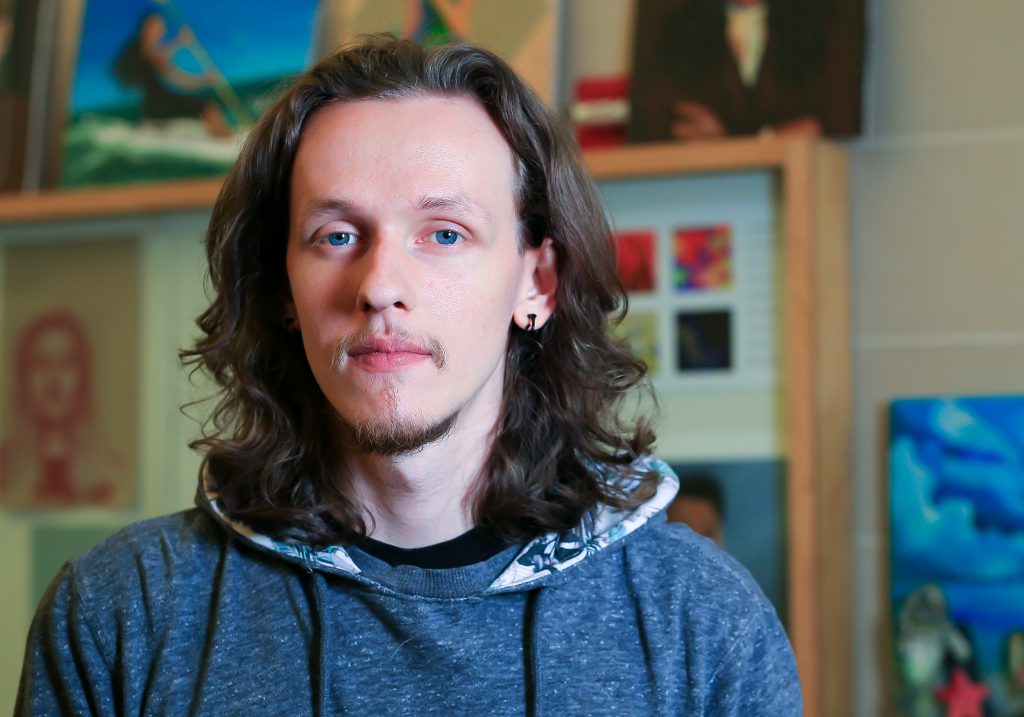 Learn more about the A.F.A. in Music at Inver Hills by contacting:

Learn more about the Intro to Midi and Sound Design course at Inver Hills by contacting: