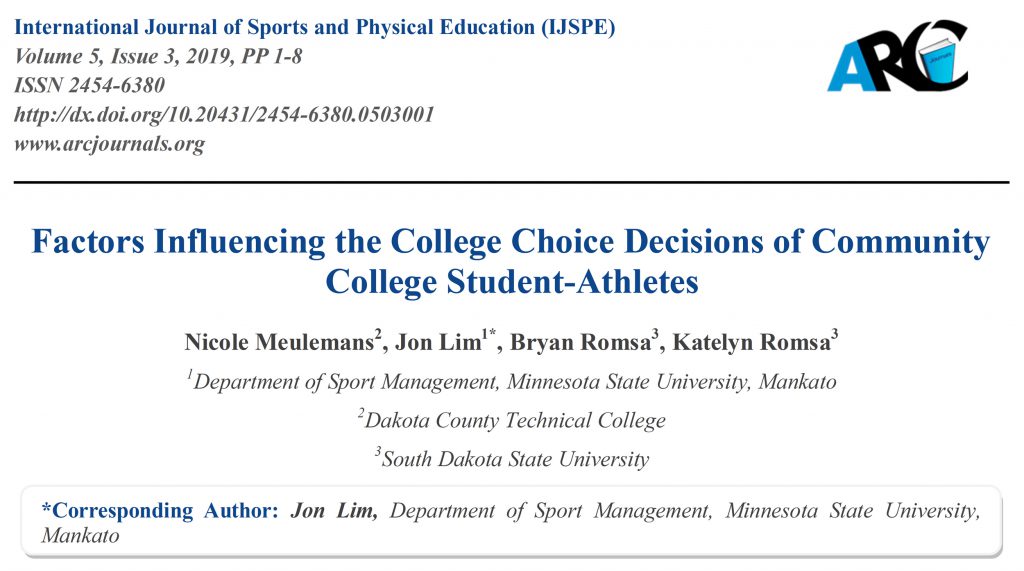 Abstract: A decision to attend college is based on many academic and athletic factors. Identifying factors most influential in college selection is beneficial to college administrators, recruiters, and coaches, and will ultimately influence recruitment, retention, and short and long-term strategic plans of an institution. This study examined factors influencing the college choice decisions of community college student-athletes in the Midwestern United States. Participants for this study were composed of 107 student-athletes (59 males and 48 females) from 19 community colleges in the Midwest regions of the National Junior College Athletic Conference (NJCAC).

This study discovered that the three most significant factors in college selection were (a) athletics/sports/extracurricular activities, (b) cost of attendance/tuition fees, and (c) head coach and coaching staff. Men selected more “athletically related factors” as influential, whereas women selected “non-athletic” as more influential. Practitioners may use this information to effectively shape their recruiting and marketing practices.

The participation rates in National Collegiate Athletic Association (NCAA) sports have shown a steady and continual climb over the past three decades and are at an all-time high for both male and female student-athletes (NCAA, 2019). Nearly half a million college athletes make up the 19,750 teams that send more than 52,500 participants to compete each year in the NCAA’s 90 championships in 24 sports across 3 divisions.

According to the recent NCAA Sports Sponsorship and Participation Rates Report, there were a total of 494,992 student-athletes competing in 24 sports at the Division I, II, and III, with the number of teams competing in NCAA championship sponsored sports continued to rise to a record of more than 19,000 during 2017-18 academic year (NCAA, 2018). Nicole has a Master of Science (M.S.) in Athletic Administration from Minnesota State University, Mankato, where she served as the 2008 graduate student commencement speaker. She also has an undergraduate degree in exercise and sports science from the University of Wisconsin–La Crosse.

Nicole is a 2016 graduate of the Luoma Leadership Academy and a Phi Theta Kappa Golden Apple recipient. In 2012, she was named LeadMN (formerly MSCSA) Student Senate Advisor of the Year. She has served on various college-wide committees, including the Care Team and Strategic Enrollment Management Committee.

In 2010, Nicole led the initiative for DCTC to be designated a Yellow Ribbon Campus supporting veterans, military members and their families. Nicole resides in Lakeville, Minnesota, with her husband, Ryan, and their two children, Addison and Bennett.

Learn more about Student Life at Inver Hills by contacting:

Learn more about Student Life at DCTC by contacting: