When the first Anytime Fitness facility opened in Cambridge, Minnesota, in 2002, no one involved in the health and fitness industry foresaw a franchise system with 3,300 locations and 2 million members in all 50 states and 30 some countries on five continents. Chuck Runyon, Anytime Fitness CEO and co-founder, was looking to offer consumers a less expensive, more convenient alternative to high-end fitness centers with too many extras and a discouragingly buff clientele. The idea was new and untried in the industry.

“We came up with a 24/7 model with no frills,” Chuck said, adding that Anytime Fitness also provided state-of-the-art exercise equipment, individual changing areas and showers, and reasonable membership fees. “I was visiting a small exercise club in Tullahoma, Tennessee. The owner was handing out keys to club members so they could use his facility anytime.”

Chuck took that concept and turned it into an electronic key fob any Anytime Fitness member can use to access any one of the company’s exceptionally user-friendly gyms worldwide any time of the day or night, 365 days a year.

People responded. Entrepreneur ranked Anytime Fitness #1 on the magazine’s list of Top Global Franchises in 2016 and 2015. Today, Anytime Fitness is the largest, fastest-growing co-ed fitness club chain in the world.

A 1987 graduate of St. Paul Johnson High School, Chuck attended Inver Hills Community College in the late 1980s. He enjoyed taking his generals at Inver and liked the college’s university-style campus, but his entrepreneurial drive superseded a collegiate career—he’s been self-employed since age 20. He teamed up with Dave Mortensen, Anytime Fitness co-founder and president, to own and operate Southview Athletic Club in West St. Paul, starting with 500 members and ending up with 4,000 seven years later. They also directed a consulting company that helped athletic clubs across the U.S. increase their memberships.

After the launch of the Cambridge facility, Anytime Fitness bypassed establishing corporate-owned clubs in favor of franchising. By 2005, Chuck knew his company was going to be big. In 2009, Anytime Fitness hit the magic 1,000-franchise mark.
“Only 1 percent of franchise companies reach that level,” Chuck said.

Anytime Fitness supports Inver Hills students through the Anytime Fitness Scholarship. Preferred recipients are Self Esteem Brands (Anytime Fitness and Waxing the City) employees; if no employees apply, the $500 award would go to the next qualified applicant.

“We are expecting matching funds to make the scholarship an endowment,” said Inver Hills Foundation Director Gail Morrison. “The endowed scholarship will benefit students for years to come.”

What should college students be doing to prepare for successful careers? 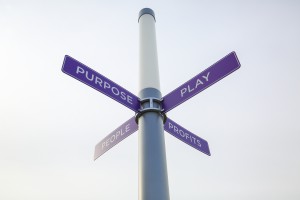 At Anytime Fitness, a regular on Minnesota Business Magazine’s “100 Best Companies to Work For,” workplace wellness and satisfaction are achieved through the philosophy of The Four Ps: People, Purpose, Profits, Play.

Bottom line, that means working to live, not living to work. With that ideal balance in mind, Self Esteem Brands, the parent company of Anytime Fitness and Waxing the City, opened a new corporate headquarters in Woodbury, Minnesota, in April 2016.

Located on 38 acres, the 80,000-square-foot HQ offers spectacular views of a wetland area surrounded by woods while featuring everything a modern work environment must have, including hiking trails, towering windows that flood office spaces with natural light, patio terraces with fire pits, full-service workout facilities, posh restrooms, a coffee/smoothie bar and a tattoo parlor (see below for more on the latter). Nearly 200 people work at the Woodbury location, which was designed to have plenty of room to grow. Anytime Fitness is on track to open 400 new stores a year over the next five years. Half the new gyms would be overseas. Outside the U.S., Australia has the most with 431; Canada and Japan follow with 135 and 134.

Skin deep really is deep when it comes to brand loyalty

The Woodbury headquarter’s onsite tattoo parlor, Bleed Purpose, is where company employees and franchise owners can get the Anytime Fitness running man logo inked on their skin for free during corporate events.

“About 3,000 people around the world have gotten the tattoo,” Chuck Runyon said. “We reimburse the cost and encourage them to share their story. You have to get the running man, but you can personalize him any way you want.”

What traits are you seeking when hiring new employees?

“We are looking for a blend of the Four Ps. Our employees support our franchise owners as coaches, teachers and nurses. We educate and motivate. We work to make the world a better place by having a positive impact. Anytime Fitness is about helping others reach their full potential.””

What do you need to become an Anytime Fitness franchise owner?
“You need a passion around wellness. You have to have a strong work ethic. You have to be an adaptable adult learner.”

What aspects of your character have been crucial to your success?
“Entrepreneurs need optimism, perseverance and the courage to take risks. Success for me is about gratitude. I don’t take things for granted.”

What’s the best part of your job as a CEO?
“I like the autonomy and the ability to make an impact, but I really enjoy the challenge of solving problems.”

Chuck Runyon resides in Stillwater, his hometown. He has four children, two girls ages 16 and 13, and two boys ages 18 and 10. He works out daily, cardio and weights, with his brother-in-law. One of his favorite places to be is the family cabin in northern Minnesota.

“Lifelong fitness is a mindset shift,” Chuck said. “Fitness isn’t about losing weight or building muscles—it’s about your overall well-being. Fitness powers everything from mental acuity to being a better spouse and parent.”

To learn more about the Business department at Inver Hills, contact:

Focus on Form at Gallery 120