Maggie Nead, 17, is a college sophomore and a high school senior. When she graduates from Inver Hills Community College and Woodbury High School in spring 2017 and heads off for the University of Wisconsin-Madison in the fall, Maggie will become an 18-year-old university junior.
Originally from Washington, Missouri, a city of 14,000 on the Missouri River, Maggie started at Inver Hills fall semester 2015 as a Post-Secondary Enrollment Options (PSEO) student. She’s a senior at Woodbury, but is a full-time student at Inver. She’s earning her Associate of Arts (A.A.) degree and has her sights set on joining the U.S. Foreign Service on a career track to become a diplomat.
“My plan is to transfer to UW Madison after Inver and double-major in international relations and political science,” Maggie said. “I would like to become involved in student government at Madison. After graduating, I am looking forward to serving in the Peace Corps overseas to gain experience.”
Maggie’s ultimate goal is to become the U.S. ambassador to a French-speaking nation—France would be her first choice. She took two years of French in high school and will be taking up the language again in spring semester 2017 at Inver.

Maggie chose Inver Hills because her sister, Elizabeth, is an Inver alumna who graduated from the Nursing program and is earning her B.S.N. via MANE at Metro State. Maggie also liked that the Inver campus is small enough so she would feel comfortable during her first year in college. She became active in Student Senate her first semester, serving as communications director. She currently serves as Student Senate vice president.
“I went to my first Student Senate meeting because my political science professor was offering extra credit,” Maggie said. “I stayed because I saw the value in it. I saw the importance of making sure that student concerns are always at the front of people’s minds. We want to make sure that, in a higher education setting, the students come first.”
Maggie discovered she had the drive to make a difference as a Student Senate officer. She also recognized that same drive in her fellow senators. The previous Student Senate president, Ray Kane, became her mentor.
“Ray always believed in my capabilities and my leadership skills,” she said. “He encouraged me and always knew I was capable of more. Ray challenged me and supported me, and I would not be doing half of what I currently doing without him.”

“The one constant is that the most fulfilling work I do is the work I do for others.” — Maggie Nead

Maggie’s duties as VP revolve around connecting with other student groups on campus, sitting on the Student Activities Budget Committee (SABC) and supporting the Student Senate president wherever she’s needed.
“The most important function of Student Senate is to be the official voice and representation of students in all situations,” Maggie said. “We make sure that student perspectives are considered and brought to the forefront. We also provide insights for those who make decisions for students on a daily basis.”
When asked what she would tell a student who is considering joining Student Senate, Maggie said, “Student Senate has a place and an avenue for whatever a student is passionate about. If they like to draw, we would love help with promotion; if they are passionate about equity and inclusion, there are committees they can sit on; if they have concerns about a program, we can address that. Student Senate is not just about the politics, it is about the students—what they care about, what they want and what they need.” 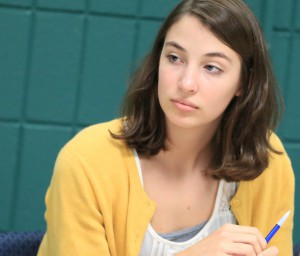 To increase the number of students voting in the general election Tuesday, Nov. 8, 2016, the Student Senate at Inver Hills Community College is partnering with the Minnesota State College Student Association (MSCSA) for Get Out The Vote 2016.
Student Senate Vice President Maggie Nead reported that the statewide, nonpartisan effort is focused on raising student awareness about the importance of their vote. In the 2014 election, only 22 percent of Minnesota State students system-wide went to their polling places and voted, an outcome suggesting 88 percent of students felt their vote did not matter.
“We want students to realize they can influence elected officials and help make issues like the high cost of tuition and fees a priority,” Maggie said. “Minnesota has the third highest tuition and fees in the nation.”
To learn more, read “Get Out the Vote 2016” on Inver Hills News.

Why did you choose diplomatic service as your career field?
“My goal has always been to help as many people as possible, whenever I can and wherever I am. Right now, that help involves advocating for students. In the future, as a diplomat, I would continue performing service, only around the world. The one constant is that the most fulfilling work I do is the work I do for others.”
What has been your toughest challenge in life?
“I have pretty bad anxiety and when I get overwhelmed or stressed, it only gets worse. Learning how to successfully acknowledge, manage and deal with anxiety in a healthy and effective manner has been really hard, but I am getting so much better at it.”
What is your greatest accomplishment?
“This past fall I was hired by the Minnesota State College Student Association (MSCSA) as an equity and inclusion intern. While a lot of work is yet to be done, I am very proud to have worked so hard to earn that title.”
What do you consider your most important civic responsibility?
“Using your voice and speaking out. Nothing ever changes if we do not talk about it.”
Three words that describe you as a college student:
PASSIONATE. OUTSPOKEN. AMBITIOUS.

Maggie resides in Woodbury, Minnesota, with her parents. She has four sisters, Christine, 27 and married, Elizabeth, 22, married and mom to Maggie’s niece, Addy, Catherine, 20, and Danielle, 11. She has one brother, James, 23. She loves singing—she sang in two choirs in high school, but her schedule in college leaves little time for activities beyond her coursework and advocacy duties.
“I am lucky enough that what I am passionate about falls in line with what I get paid to do,” she said. “So much of my free time is dedicated to doing equity and inclusion work for MSCSA, or research to help me grow in my own knowledge and better allow me to advocate on behalf of every student.”

Countries where French is an official language

The officially recognized representative of the student body at Inver Hills, the Student Senate delivers student viewpoints on issues related to college committees and policies. The Student Senate also develops projects and activities for members, the college and the community as well as at the Minnesota State Capitol.
Meetings every Thursday at 2 p.m. in the Green Room. All are welcome.

To learn more about Student Senate at Inver Hills, contact: