Student Senate officers are skills up in connectivity, collaboration, creativity and commitment

Officially recognized as the voice of the student body at Inver Hills Community College, Student Senate is the ideal pathway to get involved, define your leadership potential and make a real difference on campus. Joining the Senate could not be easier. All you have to do is attend two consecutive meetings and you’ll be inducted as a senator. You don’t have to start a super PAC or hit the campaign trail.

The Student Senate offers opportunities to discuss matters of importance with other students. The Senate delves into a number of key issues on campus, including:

In the last decade, Student Senate at Inver Hills was named Student Senate of the Year three times by the Minnesota State College Student Association, or MSCSA, which includes student senates from nearly 50 Minnesota two-year colleges in its membership.

Open to all, Student Senate meetings are held every Thursday at 2 p.m. in Room 210 in the Liberal Arts building on campus. The Student Senate office, located on the first floor of the College Center near the Fresh Stop Café, is the place to go if you have questions about the higher education experience. 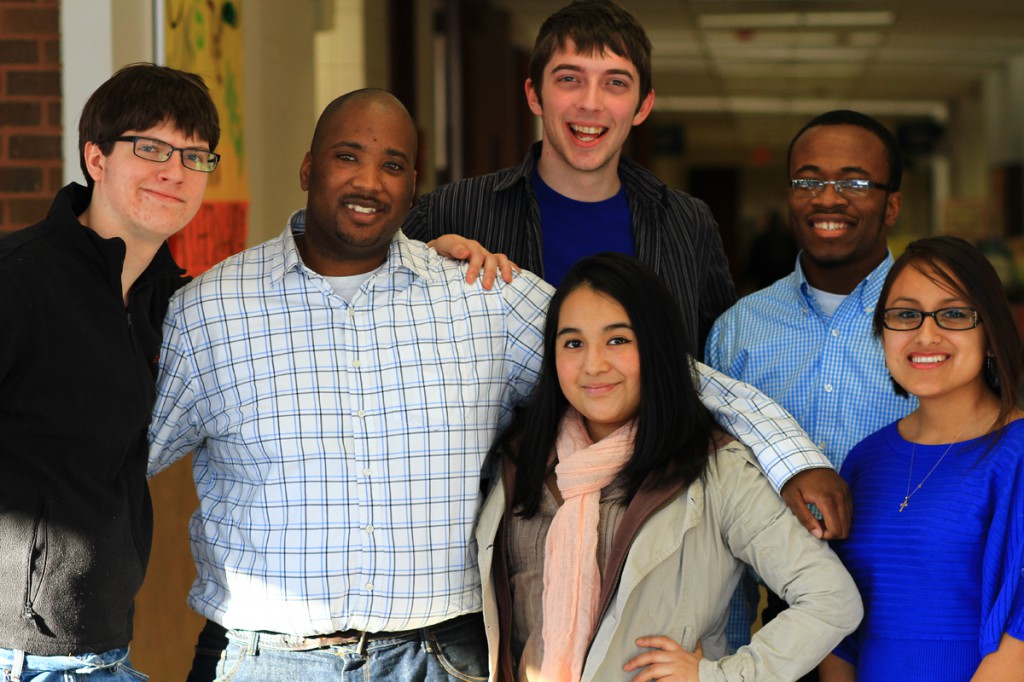 Meet the Student Senate Executive Board 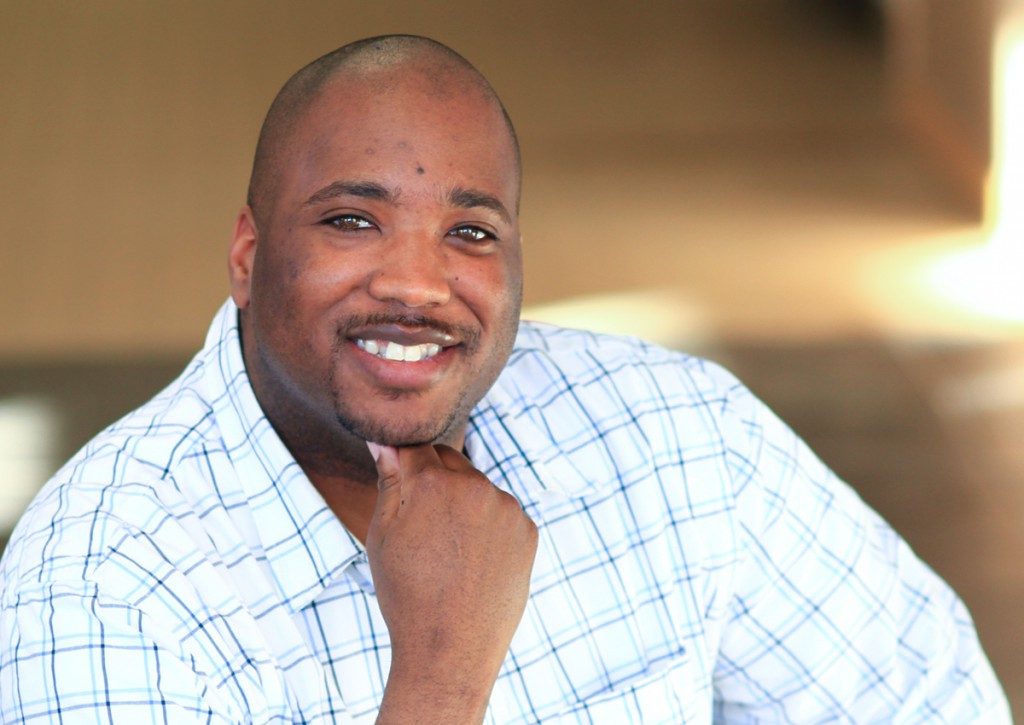 Age: 28
Hometown: Franklinton, La.
Residence today: Northeast Minneapolis
Area of study: Education
Degrees: A.A. & Education Foundations A.S.
Graduating: Fall 2014
Before Inver Hills: 2004 graduate of Burnsville High School; worked at corporate HQs of Fortune 500 companies
Other student life activities: CRU Christian Fellowship president
Family: 8-year-old daughter, Neveah, and 6-year-old son, Jaevon
Brent Magee started at Inver Hills in spring 2013. “The college felt right,” he said. “I enrolled in classes and everything fell into place. I was at peace.” He likes how people say hello to each other on campus, creating a powerful sense of community. “It’s Southern hospitality right on campus,” he said. Brent is heading for Concordia University Saint Paul after graduating from Inver with plans to earn his B.S. in sociology. His goal is to earn a Ph.D. and become a sociology professor.
IHM: What do you like about the college?
Brent: I love the people and the community feel—and the campus itself is beautiful.
IHM: Why should students consider joining Student Senate?
Brent: You have a voice and you can be an advocate for yourself and other students. As a student you have power, but that power is only for those who show up.
Seven favorites and wishes

“To be successful as possible as a student at Inver Hills, you need to get connected, join clubs, be a leader and shine that light.” — Brent Magee 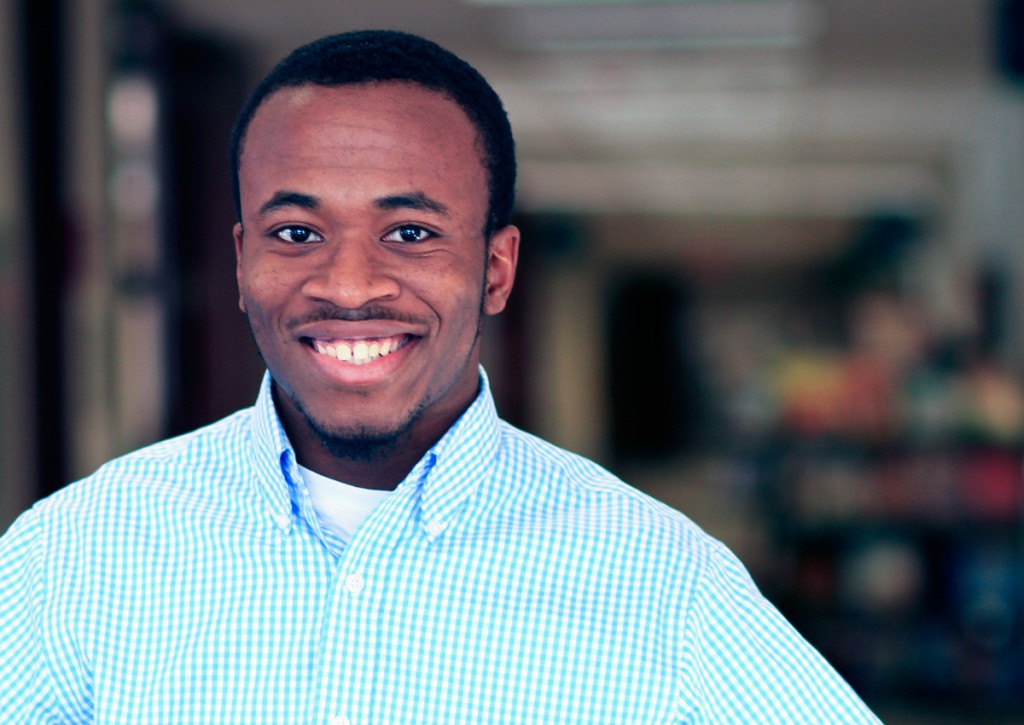 Age: 19
Hometown: Imo, Nigeria
Area of study: Human Services
Degrees: Human Service Worker A.S.
Before Inver Hills: Graduated from Mbari Mabayo Secondary School in Lagos
Other student life activities: CRU Christian Fellowship; International Student Club public relations officer, or PRO; Phi Theta Kappa
Family: Only child
Nnamdi Nwaneri grew up speaking both English and Igbo (Ibo) in his native Nigeria, which is the seventh most populous country in the world with nearly 174 million people. “I came to the United States for the quality of education,” he said. “I was looking for greener pastures.” Nnamdi plans to earn his master’s degree in social work after Inver. From there, he is looking at Harvard Law School and then possibly a career in politics. He enjoys swimming, reading and listening to political debates.
IHM: What do you like about the college?
Nnamdi: I like the architecture and the seasoned instructors.
IHM: Why did you join Student Senate?
Nnamdi: I have a love for politics and I want to be an advocate for students.
Seven favorites and wishes

“Student Senate gives you the opportunity to get in touch with what’s happening at the college while gaining leadership experience.” — Nnamdi Nwaneri 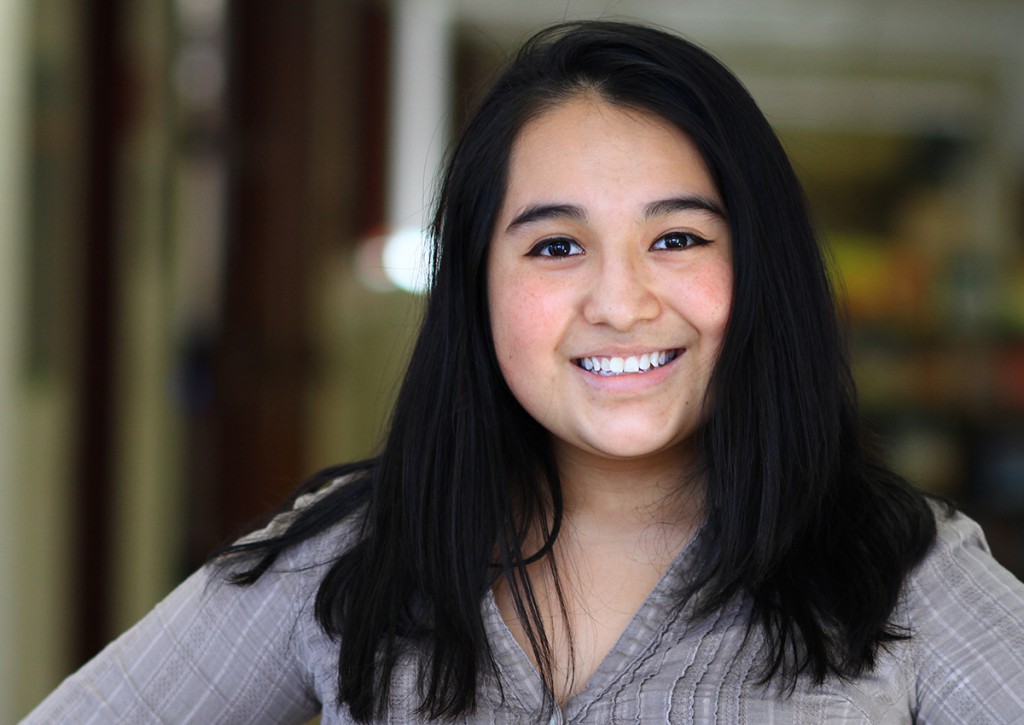 Age: 20
Hometown: West St. Paul, Minn.
Residence today: St. Paul, Minn.
Area of study: Liberal Arts
Degrees: A.A.
Graduating: Fall 2015
Before Inver Hills: Graduated from Henry Sibley High School in Mendota Heights, Minn.; worked all four years of high school as the full-time manager of a McDonald’s franchise
Other student life activities: DECA president; Unidos treasurer; Edge; 2014 Power in Diversity Leadership Conference ambassador
Family: Mom and one older brother
Beatriz Olivares enjoys participating in MSCSA and has attended three of the association’s conferences. In late February 2014, Beatriz and seven other IHCC students advanced to the Collegiate DECA International Career Development Conference (read more). She  introduced Nontombi Naomi Tutu, the daughter of Desmond Tutu and a human rights activist, during Power in Diversity 2014 at St. Cloud State University. “I have one goal in life and that’s to pursue a career in international business at a Fortune 500 company,” she said. “I would love to attend the Carlson School of Management after Inver Hills.”
IHM: What do you like about the college?
Beatriz: I love the teachers and staff.
IHM: Why should students consider joining Student Senate?
Beatriz: Students don’t know they have power in their hands. If they join, they can make a change.
Seven favorites and wishes

“I am a very friendly person. I like getting out of my comfort zone so that I can embrace life.” — Beatriz Olivares 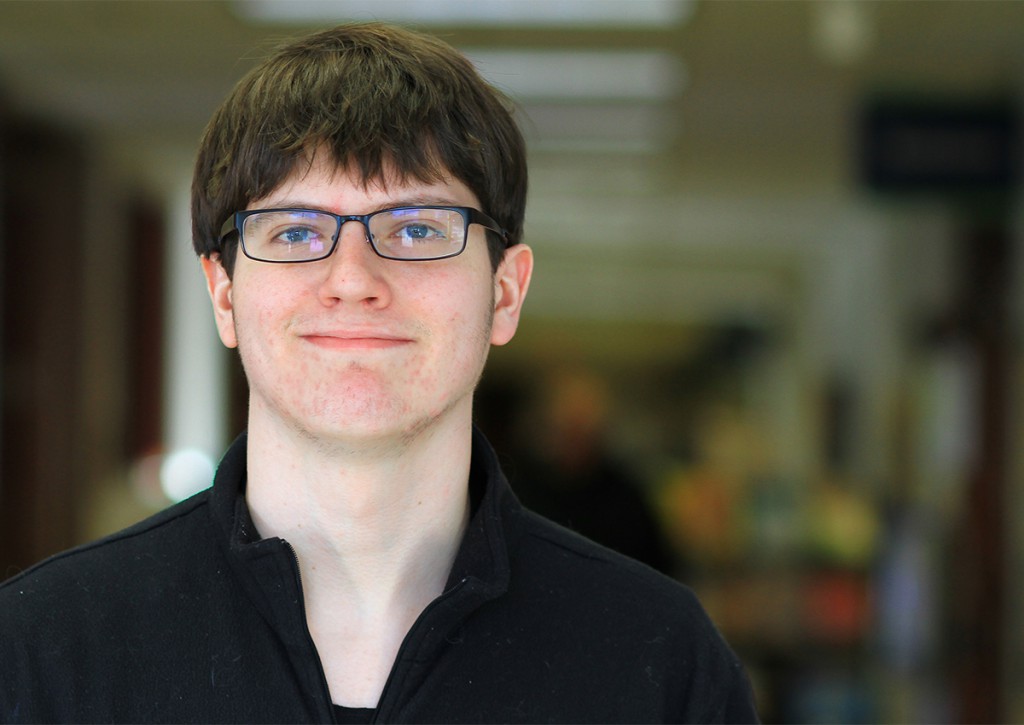 Age: 21
Hometown: Apple Valley, Minn.
Residence today: Apple Valley, Minn.
Area of study: Liberal Arts
Degrees: A.A. with an emphasis in political science
Graduating: Fall 2014
Before Inver Hills: Graduated from School of Environmental Studies (SES) in Apple Valley
Both Eagle Scouts, Michael Whelan and Stefan Chellsen (see below) have been friends for 11 years. Michael has a strong interest in creative writing. He currently works as a certified pre-optometric technician. “My long-term career plans will focus on something in the field of political science,” he said. “I learned about Student Senate through an extra-credit project in a political science class. That sparked my interest and I got more involved.”
IHM: What do you like about the college?
Michael: I love the people and environment. I really like the teachers.
IHM: Why should students consider joining Student Senate?
Michael: You have dollars invested in your education. Join and represent your voice.
Seven favorites and wishes 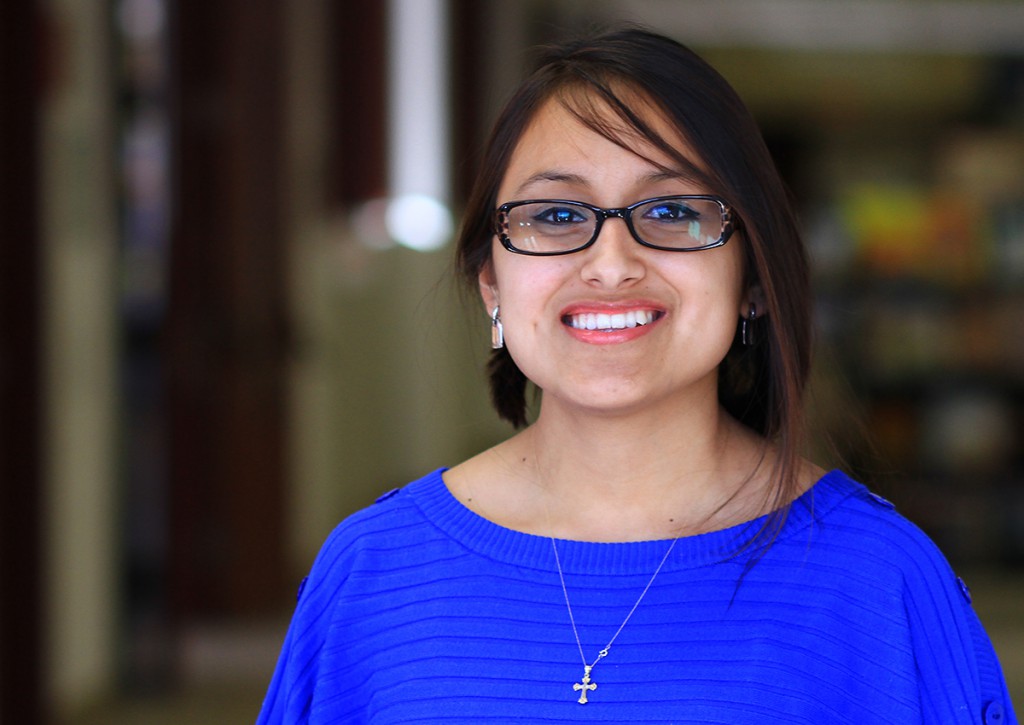 Age: 20
Hometown: Brooklyn, N.Y.
Residence today: Apple Valley, Minn.
Area of study: Education
Degrees: A.A. & Education Foundations A.S.
Graduating: Fall 2014
Before Inver Hills: Graduated from Farmington High School; studied nursing at Crown College in St. Bonifacius
Other student life activities: CRU Christian Fellowship VP; Unidos marketing director; International Student Club secretary; Asian Club; Black Student Union; Art Club
At the age of 11, Cynthia Marie Lopez broke her spinal cord in a car accident. Doctors said she would need five years to heal, but she made a full recovery in less than a month. Bullied throughout her childhood, Cynthia Marie left that trauma in her past by way of her faith in Christianity and her desire to become fully engaged in her campus community. “I am a people person,” she said. “I’m a good listener and accepting of outsiders. I try to get reclusive people more involved.” She will be following the 2+2 B.A. in Teacher Education with Concordia University after graduating. She would like to be an English as a second language teaching assistant to gain experience and then go on to work in third-world countries, teaching children who have had tough upbringings.
IHM: What do you like about the college?
Cynthia Marie: I like the atmosphere and all the opportunities to get involved.
IHM: Why should students consider joining Student Senate?
Cynthia Marie: Leadership Academy is great. You learn skills you can take with you the rest of your life.
Seven favorites and wishes

“As a student senator, you stand up and make decisions rather than have others make them for you.” — Cynthia Marie Lopez 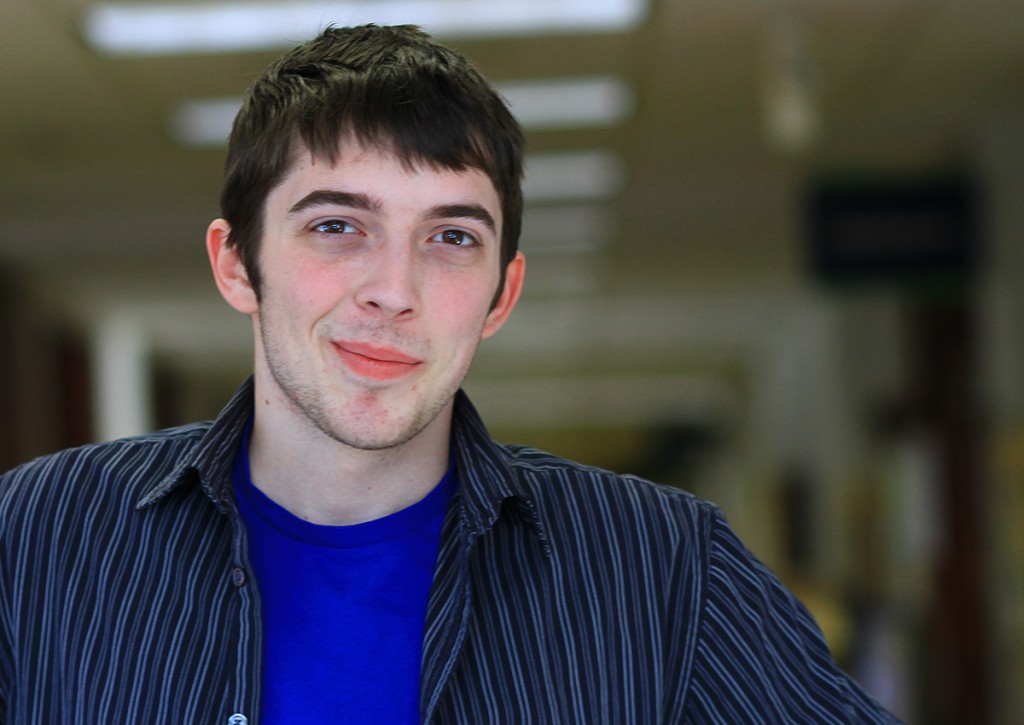 Age: 20
Hometown: Apple Valley, Minn.
Residence today: Apple Valley, Minn.
Area of study: Liberal Arts
Degrees: A.A. with an emphasis in political science
Graduating: Fall 2014
Before Inver Hills: Graduated from School of Environmental Studies (SES) in Apple Valley
Other student activities: Inver Hills Theatre
Stefan Chellsen has an affinity for politics and is particularly interested in environmental issues. He has attended Democratic events, including primary caucuses and a convention, but doesn’t accept party positions out of hand. “I’m the person who’s always asking questions,” he said. His future plans include earning a B.S. in political science at the University of Minnesota. He is considering a career as a community or campaign organizer. Like his friend, Michael Whelan, Stefan grew up taking part in outdoor activities as a Boy Scout—and he takes pride in his scouting skills. “I can start a fire anywhere,” he said. You can see Stefan in the college production of A Midsummer Night’s Dream at the Inver Hills Theatre Friday, March 7, and Saturday, March 8, 2014. He is playing “Oberon” and “Theseus.”
IHM: What do you like about the college?
Stefan: I’ve met a lot of nice people and made a lot of good friends.
IHM: Why should students consider joining Student Senate?
Stefan: You can make an impact. We go to awesome MSCSA conferences.
Seven favorites and wishes 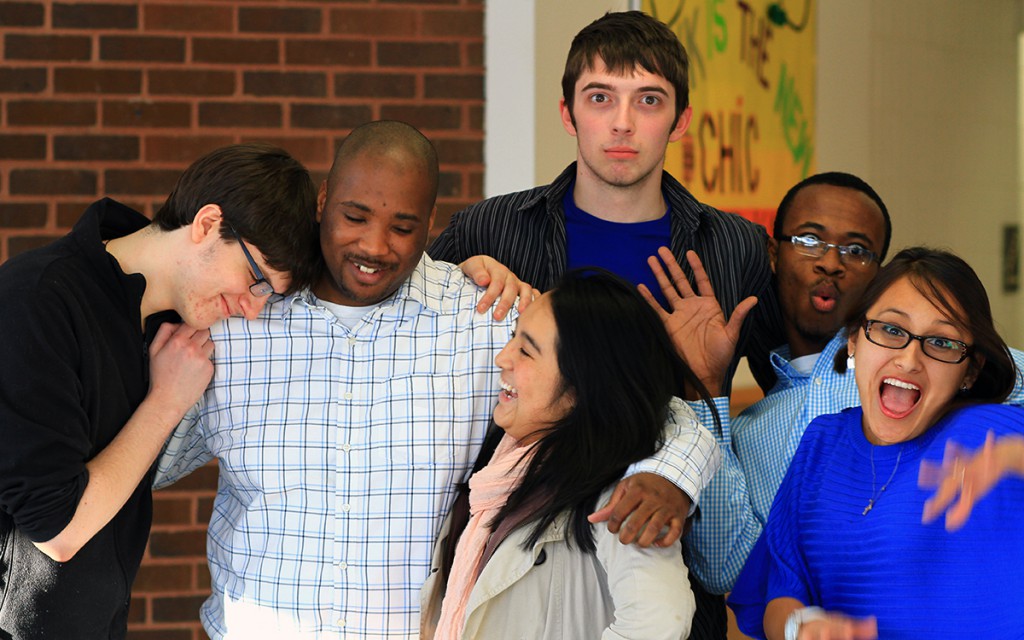