Dr. Cristow, the Harley Street lothario, is at the center of the trouble when, assembled in one place, we find his dull but devoted wife, Gerda, his mistress and prominent sculptor, Henrietta, and his former lover and Hollywood film star, Veronica Craye.

Also visiting are Edward and Midge, whose romantic assertions are likewise thrown into the mix. As the list of romantic associations grow so does the list of potential suspects when Cristow is shot dead. Nearly everyone has a motive, but only one of them did the deed. A smoking gun—but who pulled the trigger? 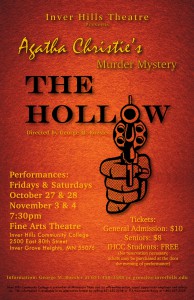 (No reservation necessary, tickets may be purchased at the door the evening of performance.)

Alicia Goblirsch, 18, is portraying Gerda Cristow in The Hollow. Alicia started her acting career at Inver Hills playing Cecily Cardew in The Importance of Being Earnest.

“I was in some plays in middle school, but I wasn’t thinking about acting when I came to Inver,” Alicia said. “George Roesler, the play’s director, asked me to audition for Earnest and I decided to give it a try. I really enjoyed playing Cecily.”

Alicia grew up in Apple Valley, Minnesota, graduating from Apple Valley High School in 2017. She is earning her Associate of Arts (A.A.) degree at Inver Hills. Her plan is to transfer to the University of Minnesota to earn a bachelor’s degree. She hasn’t decided on her major yet, but she’s leaning toward counseling.

“I’ve thought about becoming a therapist, but I haven’t made up my mind,” Alicia said. “I really like the idea of working with kids.”

Alicia works as a part-time bank teller at Merchants Bank in Apple Valley while going to college. She doesn’t have a lot of free time between work, homework and acting, but she enjoys watching movies, especially Christmas movies, listening to music and hanging out with her dog, a 2-year-old, nine-pound schnekingese named Rosie; a schnekingese is a cross between a miniature schnauzer and a Pekingese.

Three words that describe you as an actor:
IMAGINATIVE. KIND. REALISTIC.

“We stay connected through bible study,” she said. “We have maybe thirty members in our group and I’m the youngest.”

Alicia commutes to Inver from Apple Valley. Her mom, Wendy, works for the Hastings Chamber of Commerce—and she’s known for her baking skills. Her dad, Bruce, is president of Merchants Bank in Hastings. Alicia has two sisters, Stephanie, 25, who works at a Florida resort and was in Florida house-sitting during Hurricane Irma, and Amanda, 22, an Inver alumna who acted in a number Inver Hills Theatre productions, including An Enemy of the People, A Midsummer Night’s Dream and Rapunzel and the Frog Prince.

What is your highest goal as an actor?
I would love to continue acting after Inver. Realistically, I would be happy playing a princess at Disney World or a soap opera actress or be in a Hallmark movie.

What’s the favorite role you’ve played onstage?
Cecily Cardew from The Importance of Being Earnest

What’s your greatest strength as an actor?
I have fun when I’m acting. I think of acting as a profession, but that doesn’t mean it can’t be fun.

What role do you most want to play?
Belle from Beauty and the Beast.

What actor has influenced your work the most?
Emma Watson

What role do you play in The Hollow?
I play Gerda, John Cristow’s wife. She’s dim, stupid and slow, but she idealizes her husband. Gerda is always looking lost and confused. When I go onstage as Gerda, I empty myself and become as dazed as Gerda. She’s the one who discovers John’s dead body. When I’m Gerda, I stop thinking my thoughts and start thinking hers.

Previous roles in Inver plays:
Cecily Cardew in The Importance of Being Earnest

Roles in plays before Inver:
Two middle school productions:
One of Ariel’s sisters in The Little Mermaid
Martha in We the People
Plus other smaller roles

Theatre department mission: Improve students’ understanding of the role of theatre arts in lifelong learning, and to help students develop skills and capabilities in the performance of as well as appreciation for the theatre arts.

Theatre department vision: Continue to help students understand developing theatre and film trends, to adapt to new techniques of learning the skills of performance, and to deepen their theoretical, historical and global analysis of theatre arts and film appreciation.

Hannah Morgan, 19, of Farmington, Minnesota, is portraying Henrietta Angkatell in The Hollow. A 2016 graduate of Farmington High School, Hannah is pursuing her Associate of Science (A.S.) in International Business at Inver Hills. She has been working at Lifetime Fitness for two and half years and loves her job as an event coordinator for kids activities. She also works as the assistant manager for the location’s rock wall department.

Hannah is on track to graduate from Inver in spring 2018. Her plan is to attend UW–River Falls to earn a bachelor’s degree. She wants to continue expanding her business knowledge and eventually go to work for Lifetime Fitness corporate.

Hannah is an accomplished musician who sings and plays a myriad of instruments, including piano (her favorite), electric and acoustic guitar, violin, flute and many more. She also teaches violin, voice and piano. When she’s not studying, working at Lifetime or going to play practice, Hannah loves to run. She just completed the Twin Cities Marathon, completing the 26.2 mile race in three hours and 10 minutes.

“I hit the wall at twenty miles,” she said. “I asked myself why I was putting myself through so much pain and then knew I needed to prove to myself I could do it. The pain went away and I ended up beating my goal time by thirty-five minutes.”

Hannah is training to break the three-hour barrier, which will qualify her to run in the Boston Marathon. Her next race will Grandma’s Marathon 2018 in Duluth.

Hannah believes in building strong relationships and considers four people in her life to be “her rocks.” One is her mom, Laura Theodore. Hannah gets her nickname, Teddy, from her mom’s maiden name. One is her 14-year-old brother, William, who just earned his black belt in taekwondo. He’s also the smartest person Hannah knows; he can complete a Rubik’s Cube in 30 seconds. Another is her best friend growing up, Rebecca Reash, who lives in Coeur d’Alene in northern Idaho. Rebecca and Hannah acted in the same plays all through high school. And one is her friend, Erin Oellerich, who works with her at Lifetime Fitness. They formed a bond right from the start.

What is your highest goal as an actor?
Have fun and feel the joy of it. Theatre is not supposed to be stressful—but it is and it’s a good stressful.

What’s the favorite role you’ve played onstage?
Henrietta in The Hollow. I never connected with a character so fast. She has so much spunk. She hides her emotions and for the longest time I did, too. Sadness, anger, depression—any negative emotions I would try to avoid. Then one day I just asked myself why we have bad emotions. I became more open to experiencing negative feelings when I realized we have these feelings for a reason.

What actor has influenced your work the most?
Winona Ryder. I really liked her in Stranger Things and Beetlejuice.

What role do you play in The Hollow?
Henrietta Angkatell. She puts up a wall and is very guarded, but when it comes to John [Cristow] she lets down her guard. She also doesn’t take any crap from anyone. I identify with Henrietta because I’m the same way. I wasn’t always. I used to let people walk all over me, but then one day I just said no more.

Previous roles in Inver plays:
Gwendoline Fairfax in The Importance of Being Earnest
The witch in Hansel & Gretel
Several characters, including a cop, pilot and old man, in The 39 Steps

To learn more about The Hollow as well as the Theatre department and A.F.A. in Theatre at Inver Hills, contact: