A trivial comedy for serious people

Inver Hills Theatre is presenting The Importance of Being Earnest, a play by Oscar Wilde, February 17, 18, 24 and 25, 2017. George Roesler, the play’s director and theatre faculty at Inver Hills Community College, noted that the play remains one of Wilde’s most enduring, hilarious, astute and highly regarded works.

Oscar Wilde’s play, The Importance of Being Earnest, is a witty, sharp and insightful comedy and commentary on society. Although Wilde wrote the play in 1895, I have chosen to place the setting in the early 1920s, the Roaring Twenties. I moved the play from England to America, placing the scenes in New York and Long Island, using The Great Gatsby as a model for the look of the play.

We are discovering a direct connection between the foibles of society life in the 1920s with our own times. The play is very funny, combining fast-paced dialogue, outrageous characters and a bit of slapstick. — George Roesler, Inver Hills Theatre faculty

“The truth is rarely pure and never simple.” — Oscar Wilde 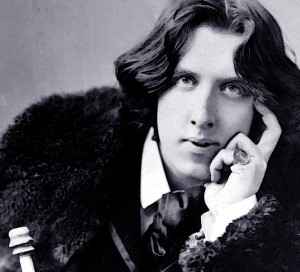 Theatre department mission: Improve students’ understanding of the role of theatre arts in lifelong learning, and to help students develop skills and capabilities in the performance of as well as appreciation for the theatre arts.
Theatre department vision: Continue to help students understand developing theatre and film trends, to adapt to new techniques of learning the skills of performance, and to deepen their theoretical, historical and global analysis of theatre arts and film appreciation.

Hannah Morgan, 19, of Farmington, Minnesota, is portraying “Gwendoline Fairfax,” one of the leads in the play. A 2016 graduate of Farmington High School, Hannah is pursuing her Associate of Fine Arts (A.F.A.) in Music at Inver Hills. She is an accomplished musician who sings and plays a myriad of instruments, including piano (her favorite), electric and acoustic guitar, violin, flute and many more.
“My mom got me started playing piano when I was five,” Hannah said. “I’ve been working with a private music teacher, Andy Smith, since I was eleven. I enjoy playing classical music and I love jazz, especially the work of Louis Armstrong and Michael Bublé.”

Hannah is on track to graduate from Inver spring 2018 or earlier. She’s looking at a number of four-year schools, including UW–River Falls, the University of Minnesota Duluth and Minnesota State University Mankato. Her career goals are centered on becoming a private music lesson teacher, but she also wants to continue her acting career.
“I love the emotion of theatre,” Hannah said. “I love how you can take your personal life and throw it all away while you’re onstage. I love the way people in the audience feel that emotion and get engaged with the performance.”
When Hannah’s not working at Lifetime Fitness, studying and going to play practice, she enjoys hanging out with her friends and running as much as she can (she ran track and cross country in high school). She also meditates and practices vinyasa yoga. She has a younger brother, William, 14, and a younger sister, Ella, 6. 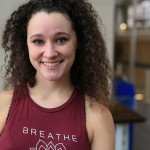 Algernon’s cousin and Lady Bracknell’s daughter, Gwendoline is in love with Jack, whom she knows as Earnest. A model and arbiter of high fashion and society, Gwendoline speaks with unassailable authority on matters of taste and morality. She is sophisticated, intellectual, cosmopolitan and utterly pretentious. Gwendoline is fixated on the name “Earnest” and says she will not marry a man without that name.
— SparkNotes

What is your highest goal as an actor?
Have fun and feel the joy of it. Theatre is not supposed to be stressful.

What’s the favorite role you’ve played onstage?
I was “Plathor,” a demigod in a high school production of The Iliad and the Odyssey and All Greek Mythology in 99 Minutes. Plathor was auditioning to be a hero, but I played him as a total nerd. He ended up dying by flying too close to the sun.

What actor has influenced your work the most?
Merle Streep. She has such a strong demeanor and can flip the switch just like that. That’s what I want to be able to do.

What are the most noteworthy attributes of Gwendoline Fairfax?
She really likes herself in a good way. She’s educated and sociable and she gets what she wants. She’s controlling in that way.

The Importance of Being Earnest 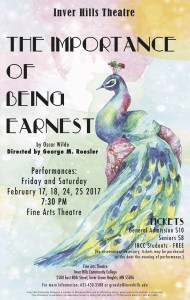 General Admission: $10
Seniors: $8
Inver Hills Students: FREE
No reservation necessary
Tickets may be purchased at the door the evening of the performance.

Travis Nelson, 19, of Rosemount, Minnesota, is portraying “Jack Worthing,” the play’s main character who sends his alter ego, Earnest, on a mission to London. A 2016 graduate of Rosemount High School, Travis is earning an Associate of Arts (A.A.) degree at Inver Hills. He’s undecided about his major, but knows for certain his strongest career goal is becoming a professional actor.

“Right now, I’m looking at going to the University of Minnesota Duluth,” Travis said. “I’m thinking about double-majoring in communication and theatre. ”

Three words that describe you as an actor:
SERIOUS. RANDOM. NATURAL.

Travis is aiming at graduating from Inver spring 2018. He works as a server at the Hy-Vee Market Grille in Lakeville, a job he enjoys because serving brings him in close contact with people, an observant actor’s most valuable resource.

“I’m determined have a career as a paid actor,” Travis said. “I would be happy to work in theatre or film. Both are a lot of fun.”

When he’s not working, going to play practice or studying, Travis likes to play online videogames with his friends. His favorites are League of Legends and two indie games, Undertale and The Binding of Isaac. He has two older siblings, Derek, 25, and Nicole, 22. 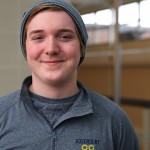 The play’s protagonist, John “Jack” Worthing, is a seemingly responsible and respectable young man who leads a double life. In Hertfordshire, where he has a country estate, John is known as Jack. In London, he is known as Earnest. As a baby, Jack was discovered in a handbag in a Victoria Station cloakroom by an old man who adopted him and subsequently made him guardian to his granddaughter, Cecily Cardew. Jack is in love with his friend Algernon’s cousin, Gwendoline Fairfax.
— SparkNotes

What is your highest goal as an actor?
To be able to act for a living.

What’s the favorite role you’ve played onstage?
“Richard Hannay” in The 39 Steps. That was a grueling role with a lot of lines.

What’s your greatest strength as an actor?
Memorization

What role do you most want to play?
The Baker in Into the Woods

What actor has influenced your work the most?
Leonardo DiCaprio

What are the most noteworthy attributes of Jack Worthing?
Seriousness. He’s a very serious guy. When he goes to town as Earnest, he has the chance to be less serious. 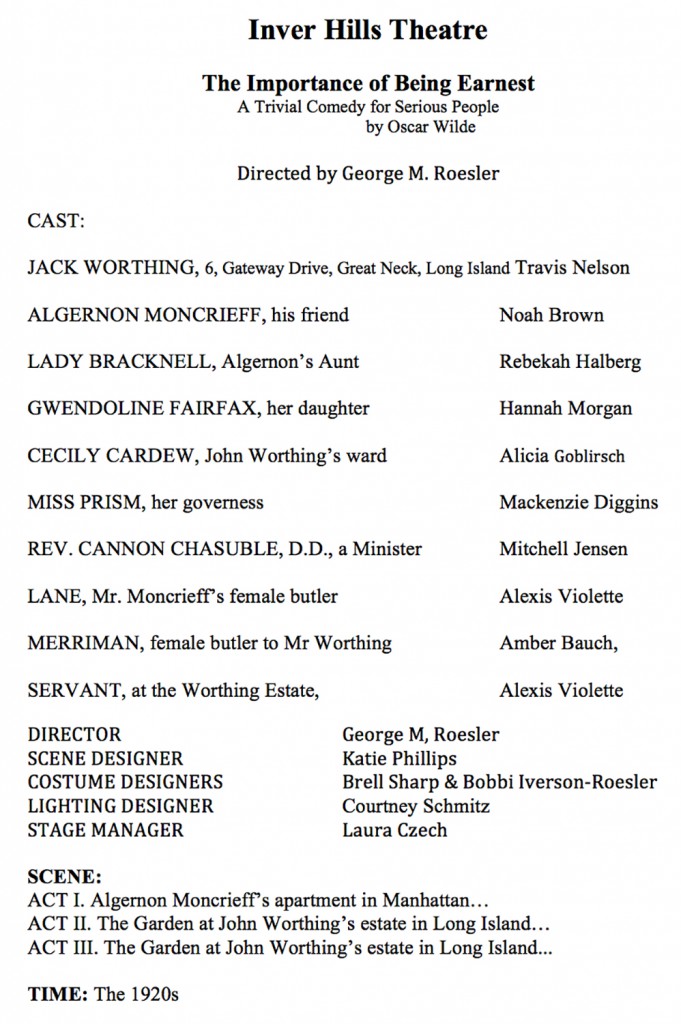 To learn more about The Importance of Being Earnest as well as the Theatre department and A.F.A. in Theatre at Inver Hills, contact: