“Management scholars in Africa have much to share with the rest of the world,” reported Hamid Kazeroony, business faculty at Inver Hills Community College. “Africa is a continent with fifty-four countries that are home to around one billion people. The economic possibilities are enormous.”
In early January, Hamid presented at the Africa Academy of Management (AFAM) 3rd Biennial Conference in Nairobi, Kenya. The theme of the conference, “Managing Africa’s Future: Prospects and Challenges,” focused on exploring how organizational management and scholarly know-how can bring lasting prosperity to the people of Africa. The conference also served as a window for business leaders and teachers from around the world who wished to learn more about innovative management ideas proposed by African scholars.
Conference attendees like Hamid recognized the vast economic potential of a continent that covers 11.7 million square miles, or more than 20 percent of the planet’s total landmass. Experts estimate that Africa’s proven stocks of energy resources, including oil, natural gas, coal and uranium, are worth nearly $14 trillion. Key-sector resources such as agriculture, water, fisheries, forestry, tourism and human capital roll out at nearly $1.7 trillion.
But the strongest reason to support African economies and partner with the African business sector is the African consumer market, the world’s second-fastest growing behind Asia. That market represents the single largest business opportunity on the continent.

Hamid noted that China is far ahead of the U.S. when it comes to investing in sub-Saharan Africa. Trade between Africa and China totaled $200 billion in 2013; China invested $75 billion in Africa from 2000 to 2011; more than 1 million Chinese nationals are living and working in African countries. U.S. companies have committed to investing around $14 billion on the continent.

“My role at the conference was helping doctoral students with their dissertations,” said Hamid, who has attended two previous AFAM conferences, the first in Johannesburg, South Africa, in 2013, and the second in Gaborone, Botswana, a year later. “We also visited an entrepreneurship incubator in Nairobi called iHUB, or Innovation Hub. Funding from Western sources is helping iHUB entrepreneurs start and grow technology and management businesses.”

Hamid added that a student intern in the college’s Business department is working with an iHUB service manager on a project researching ways to satisfy the growing demand for affordable products in Africa. The intern is earning an Associate of Science (A.S.) degree in International Business. 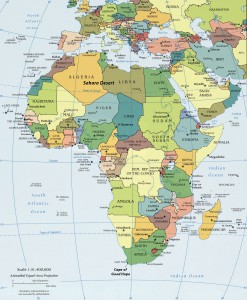 You can delve deeper into the world of business opportunities on the African continent by reading Sustainable Management Development in Africa: Building Capabilities to Serve African Organizations, edited by Hamid Kazeroony and available May 2016. The book examines how African management and business scholarship can serve African and multinational management and organizations operating in Africa.
The book not only explores how human capital and intellectual capabilities can be organized at higher education level, but also describes the cultural, social and political influencers impacting management and organization.

“Visiting Africa and attending AFAM conferences raises my awareness of management scholarship outside the United States,” Hamid said. “I bring that awareness back to my classroom at Inver Hills. My students benefit greatly from that scholarship. The contributions of African business scholars has been recognized around the world.”

Hamid Kazeroony, SHRM-SCP, SPHR, has a Doctor of Management (D.M.) in Organizational Leadership from the University of Phoenix. His dissertation was titled Leader’s Perception of Organizational Change. Hamid has an M.B.A. in Global Management from the University of Phoenix, an M.A. in Political Science from California State University, Fullerton, and a B.A. in Political Science from California State Polytechnic University, Pomona.
Hamid began teaching at Inver Hills in 2011. He created an HR Certificate aligned with SHRM modules for certification preparation work and entry-level HR positions consistent with an adult-education approach. That certificate led to the development of the college’s International Business A.S. degree program. He has obtained QM certification for 14 courses at Inver Hills.
You can read Hamid’s full faculty bio at Meet the Business Faculty.

To learn more about Business programs at Inver Hills, contact: