Originally from Los Angeles, California, Gisel Suarez Bonilla, 19, moved with her family to Minnesota when she was 8 years old. Gisel graduated from Simley Senior High in 2015. She was an active student, playing midfielder for the Spartan girls soccer team for four years and taking college-level Advanced Placement (AP) courses. She was also an honor roll student and a member of Student Council, the National Honor Society and Spanish Club.

As a resident of Inver Grove Heights, Gisel likes that Inver Hills Community College is only two minutes away from Simley. That’s one of the reasons she chose Inver Hills as the place to continue her education. Inver’s beautiful, university-style campus and the opportunity to earn an Associate of Arts (A.A.) with an Emphasis in Psychology also informed her decision. 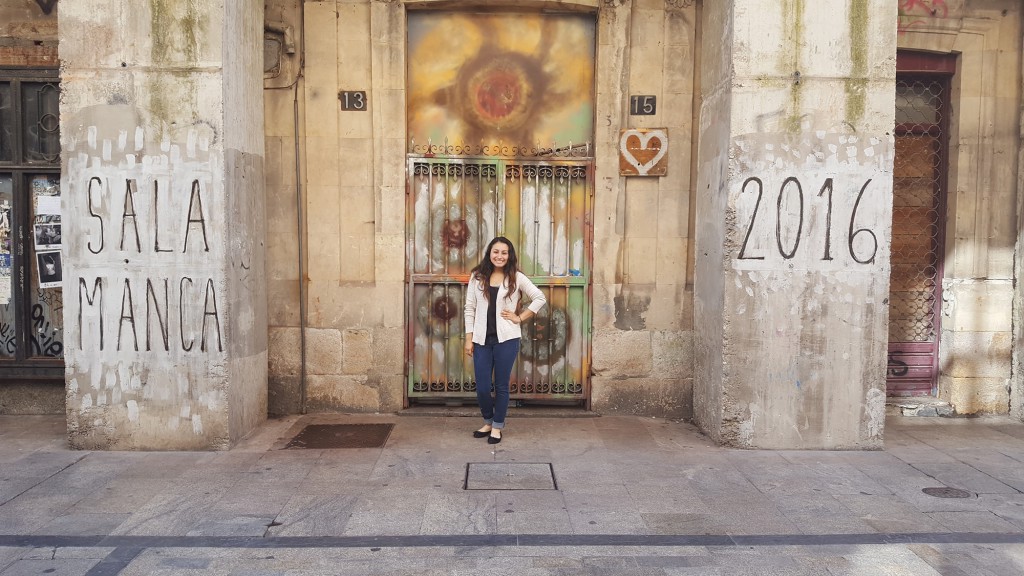 Gisel in Salamanca, Spain“I enjoyed my psychology classes in high school,” said Gisel, a first-generation college student. “The coursework engaged me and inspired me to learn more about how the brain works.”

She added that focusing on psychology while earning her A.A. degree keeps her on schedule to achieve her academic and career goals. “I’ll graduate from Inver Hills in spring 2017,” she said. “My plan is to transfer to a four-year school to double-major in psychology and Spanish. I would like to become a bilingual art therapist who helps children. I’m looking at the U of M, Augsburg and Metro State. I like that Metro State and Inver offer a 2+2 program that allows you to take psychology courses on Inver’s campus while earning your B.A. in Psychology.”

Three words that describe you as a college student:

Gisel is happy she joined TRIO Student Support Services when she started at Inver Hills. A federally funded program, TRIO SSS is designed to increase retention by providing academic and personal support to students.

“I’ve met so many great people in TRIO throughout my first year,” she said. “TRIO made the transition from high school to college smoother than I expected. The advisors also helped me understand college and made sure I was on track. I enjoy the college visits TRIO offers us because we get to see what programs, clubs and other opportunities there are at other colleges.”

Gisel knows she will miss the people she’s met through TRIO SSS, especially her advisors. “They really get to know their students,” she said, “not just academically, but also as a person. My advisor Ruby [Murillo] comes from a similar background as me so it was easier to connect with her. Ruby and the other advisors also pushed me to do my best and apply for opportunities like studying abroad.”

What does TRIO SSS provide?

“If you’re thinking about joining TRIO Student Support Services, just go for it,” said Gisel, who is also a member of Phi Theta Kappa and Unidos on campus. “The first thing is to apply and not worry about getting in.”

Gisel was one of 15 students nationwide chosen to participate in the Keith Sherin Global Leaders Program, “Spanish Language and Culture in Salamanca.” Administered by the Council for Opportunity in Education (COE), the accredited study tour is offered to TRIO college students. Gisel’s tour took place May 28 to June 30, 2016.

“Deciding to study abroad was one of the toughest decisions I’ve ever had to make,” Gisel said. “I had four days to decide. I had never been away from home or family—and I also had to consider how my financial situation and academic plan would be impacted. I’m so glad I decided to go.”

What she enjoyed most about studying abroad was meeting new people and living in a different culture. “I learned about myself through both these things,” she said. “I was able to take what I learned from the experience back home and apply it to my everyday life.”

Gisel stayed with a host family while in Salamanca, an ancient Celtic city in northwestern Spain with a population nearing 230,000. Salamanca’s Old City was declared a UNESCO World Heritage Site in 1988. She was impressed by the architecture of Spain, particularly the buildings on the campus of the University of Salamanca. She also liked the exceptionally well-balanced Spanish meals. Her favorite spot in Salamanca was El Barrio del Oeste. She loved the street art, which showcased a combination of the old and new.

Spain’s biggest surprise proved to be the Spanish people and was how laid back they are. “In the community within the city where I was living, people are walking more than driving to places,” she said. “Since people are eating a balanced diet and getting exercise daily, their lifespan is longer than the average in the United States.”

Gisel noted that adjusting to the Spanish day took a little doing. “The workday starts at eight or nine o’clock in the morning,” she said. “People work till one or two in the afternoon and then go home for lunch. Then they go back to work and stay to around eight o’clock and then go home for dinner. After that, they go back into the city and gather in the plaza. Some of the funnest times I had in Salamanca were when we were all together in the plaza in the evening.”

Other places Gisel visited on her study abroad tour included Lisbon, Portugal, and Madrid, the capital of Spain. “We were in Lisbon when the local soccer team won a big game,” she said. “The whole town went crazy. I really liked the environment in Madrid. The mood was so positive and people actually say ‘hi’ and talk to each other. We also visited Peña de Francia, a mountain south of Salamanca. The views were breathtaking.”

Gisel lives at home with her parents and 8-year-old sister. Her hobbies include drawing and painting, being outdoors, playing guitar, playing soccer (she’s played intramural soccer at Inver) and spending time with friends and family. “I want to have a successful career as a therapist one day where I’m able to maintain myself and help out my family,” she said.