Saint Paul-based new music ensemble Zeitgeist will bring its annual Playing it Close to Home concert to Inver Hills Community College Black Box Theatre on Feb. 16 for a free coffee concert. With music by award-winning local composer Mary Ellen Childs, Playing it Close to Home celebrates the wealth of musical creativity found right here in our own backyard.
The program includes the world premiere of a new work composed by Mary Ellen Childs for Zeitgeist, plus several other works from Childs’ catalog, including excerpts from her opera Propeller, “visual percussion” pieces, and music for prepared piano.

Mary Ellen Childs has been acclaimed for creating both rhythmic, exuberant instrumental works and bold, kinetic compositions that integrate music, dance and theater in fresh and unexpected ways. She has created numerous “visual percussion” pieces for her ensemble CRASH, embodying the concept of music in motion, and she writes for a variety of ensembles, including solo accordion, string quartets, chamber groups, and vocal groups. Her works engage the various senses beyond sound. Childs has a background of not only music, but also dance and theater, and was a choreographer before a composer.
According to Childs, the underlying concepts in all these art forms are the same and have been instrumental in establishing her unique musical sound. Childs’ music has been performed in Europe, Asia, Australia, and North America. She has received artists fellowships from the McKnight Foundation, the Bush Foundation and the Minnesota State Arts Board. 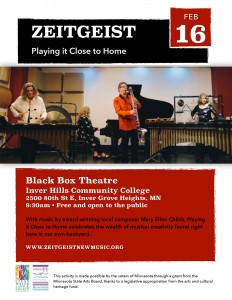 FREE and open to the public
Coffee and doughnuts will be served.

Founded in 1977, Zeitgeist is a new music chamber ensemble consisting of two percussion, piano and woodwinds, and is one of the oldest and most successful new music groups in the country. Based in St. Paul, Minn., the group presents an annual concert series and delivers a wide variety of community-based performance programs for residents of the Twin Cities and the surrounding areas. Zeitgeist’s mission is to bring newly created music to life with performances that engage and stimulate. Members are: Heather Barringer, percussion; Patti Cudd, percussion; Pat O’Keefe, woodwinds; Nicola Melville, piano.

To learn more about the Zeitgeist concert at Inver Hills, contact:

To learn more about the A.F.A. in Music at Inver Hills, contact: